I think intention is over-rated.  The word certainly has its appeal--an "intentional community" sounds much more important than a community that has come together through luck and circumstance.  I vow, on a fairly regular basis, to be "more intentional" in my prayer life or my relationship with my spouse or or with my eating habits.  This usually means that I'm going to Try Harder to Do Better in these areas.  But I know what happens to all of those good intentions. They don't last long.  Intention is taxing.

I think design is under-rated. I learned this first as the parent of toddlers. I had no idea how to foster in them the intention to (for example) gently handle breakable things.  So I got them plastic plates and cups and put the breakable things out of reach.  I eventually realized I could apply the same principle to managing myself.  If I want to read more, I need to put a book next to my bed and leave my laptop on my desk in my office.  I want to give money to my church so I set up automatic payments from the checking account at the beginning of each month and stop thinking about it completely.  I've worked hard to design my daily routines so that running, praying and writing all happen without a lot of intention on my part.

Maybe that's why I like Columbia, Maryland so much.  Jim Rouse, the developer who planned this community, had all sorts of good intentions about what would happen here.  People of different races and ethnicities and socio-economic backgrounds would live together in harmony. People would feel connected to nature and to their neighbor.  Rouse designed the community with these intentions in mind.  Single family homes were built near townhouses and apartments.  Bike paths wound their way through everyone's back yard and opaque fencing was prohibited.  Mail kiosks required everyone to leave their homes to get their mail, increasing the chance that they'd bump into their neighbor and have a chat.

Jim Rouse required all the developers who built and sold homes in Columbia to sign a non-discrimination agreement (this was before the Fair Housing Act of 1974).  And he directly marketed his development to African-American families in Baltimore.  But he didn't require the residents who moved to Columbia to make any declarations about their intention to help build a mixed, open community.  The design was supposed to take care of that.  People didn't need to have a big commitment to Rouse's vision--they could come to Columbia because they liked the housing stock or the pools or the location or the schools.  They would then find themselves living in a mixed community and would come to value it as they experienced it.

Does that model still work?  Can design sustain integration--or does it need intention?

I've been thinking about that question ever since I attended two talks this past Tuesday by Rob Breymaier, the Executive Director of the Oak Park Regional Housing Center.  On Tuesday evening, Breymaier gave a talk entitled "Sustaining Racial Integration in Housing in Columbia: Exploring the Model of Oak Park, Ill.," sponsored by the Columbia Association.  On Tuesday morning, I got a preview of that conversation at a less formal conversation with Breymaier sponsored by Leadership Howard County as part of their "This Just In" series.  Both talks were well-attended and included lots of questions from the audience.

Oak Park, Illinois, was an almost-completely white community 40 years ago, but nearby neighborhoods Chicago were "turning over" at a rapid rate.  Over the course of just a few years, entirely white neighborhoods would become entirely black due to "block busting" which took advantage of the fears of the white residents of the city after the riots of 1968.  Oak Park decided to respond to these changes with a proactive effort to build an integrated community.  The Housing Center, founded in 1972, was a big piece of that response.  Its focus is rental housing which comprises 40% of Oak Park's total housing stock.  The Housing Center offers free apartment referrals, assistance to property owners and managers, as well as support and training of private realtors.

Rob Breymaier summed up his work this way:  convincing white people that it is okay to live in racially integrated neighborhoods.  They help people generate the intention they need to help Oak Park remain integrated.

Breymaier was absolutely certain that their work is as necessary now as it was when Oak Park began its effort to integrate.  "Without the Housing Center, Oak Park would remain diverse," he said, "but it wouldn't remain integrated."  He pointed out the example of several other communities that had "re-segregated" after they backed off from their intentional efforts to manage and sustain integration.  "We know that everyone carries implicit racial bias," he said.  "Racial segregation is essentially the manifestation of lots of people's implicit bias."  The good intentions of various individuals do not sustain integrated neighborhoods.

The CA-sponsored talk on Tuesday evening ended on a provocative note.  Breymaier put up an image of Columbia from the Cooper Center's amazing Racial Dot Map: 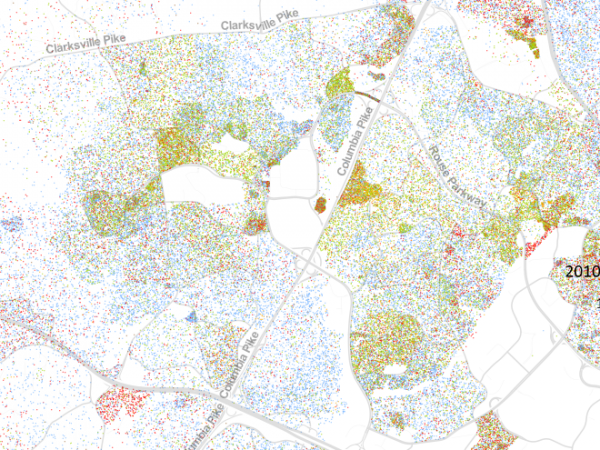 In these maps, each race is represented by a different color:  blue for white, green for black, red for Asian, yellow for Hispanic, and brown for other races.  Clearly not every neighborhood in Columbia is equally mixed.  Some areas are mostly blue dots (while) and some are mostly green (black) or red (Asian).  If you know Columbia, you will immediately see the neighborhoods with a lot of rental housing--they are the ones with a lot of green dots.  Rental property is almost 35% of all the housing stock in Columbia, I'm told.

So after showing those maps, Breymaier asked the obvious question:  Could Columbia (or Howard County as a whole) benefit from an organization like the Oak Park Housing Center?  Which is to say, if some organization isn't tasked with convincing white people to rent an apartment in Columbia, will we end up with a segregated community?

I find such an idea bizarre.  There are some really affordable, attractive apartments in Columbia that would give a renter access to all that this community has to offer.  Housing can be really expensive in this area.  Doesn't the market supply enough of an incentive to move here?

But then I think of some of the community meetings I attended over the past couple of years in Oakland Mills where the Village Board and other neighbors talked about revitalizing our Village Center.  The "implicit bias" was quite explicit.  "Those people" in the nearby rental housing were charged with dragging down our schools and our property values.  The Board's revitalization plan was created with the clear intention of reducing the amount of rental housing--and in Columbia, less rental housing means a less integrated community.  Individuals (notably Reg Avery, a Columbia Association board member) spoke up for the value of integration, but none had an organization behind them.  My husband and I struggled to figure out how to speak up for our values in these conversations.  But who were we to say, "This isn't what Columbia is all about," when most members of the Oakland Mills Village board had lived in Columbia 30 years more than we have?

Maybe Jim Rouse's 50 year old intentions aren't enough to sustain integration in Columbia, especially as we redesign his original plan.  If the design Rouse created is losing its ability to sustain racial integration, then we will have to start generating some clear and positive intention to prevent segregation.  In order to do that, Rob Breymaier is clear.  White people need to talk to other white people about why integration is a community value, and talk about why segregation violates that value.

Columbia may need that campaign soon.  This year's presidential race shows that our country needs that conversation now.  As a recent article in Washington Monthly put it, "white people who live in segregated white suburban communities are much more alarmed about demographic change (the browning of America) than white people who live and work in pluralistic communities."  Which side are we on?

Posted at 08:11 PM in A Spirituality of Us, Housing, Living Locally | Permalink | Comments (4)