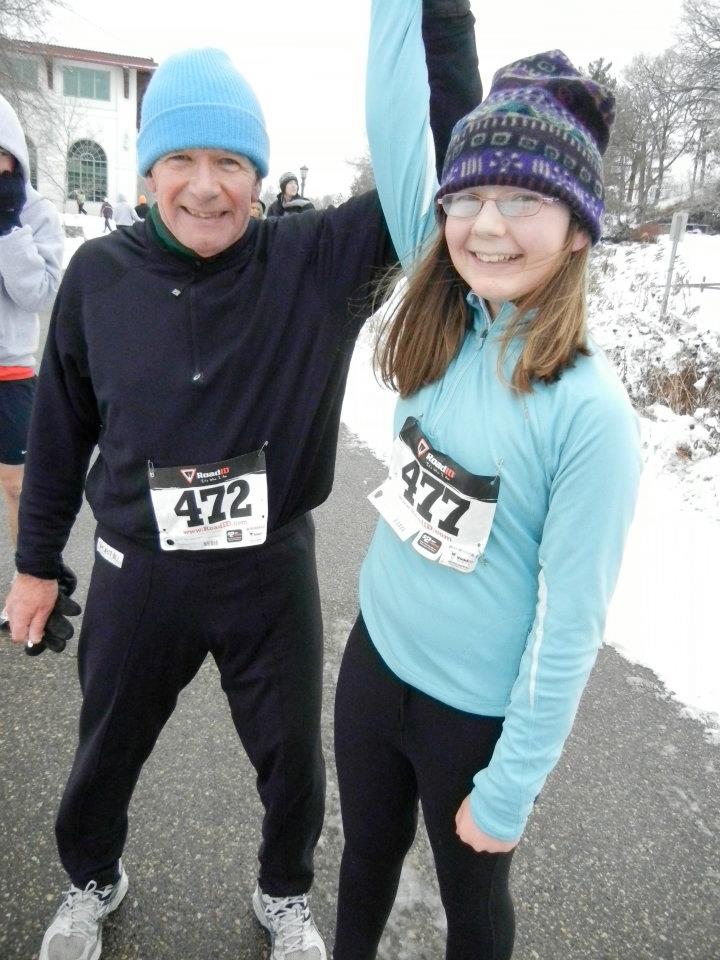 My dad, Bob Kirk, and my daughter, upon completion of a 5K in Saint Paul, Minnesota, New Year's Day 2012

When I was growing up, on a fairly regular basis my father (whose name is Bob Kirk) would announce it was time for a "New Kirk".  This usually just meant he was going to stop eating ice cream after dinner but his enthusiastic declarations were inspiring none the less.  It became part of our family's culture.  Instead of complaining about our bad habits, we would randomly declare that not only were we going to turn over a new leaf, but we were going to become new people, New Kirks.

What good does it do to make declarations like that?  Does it help to say out loud who we are--or who we intend to be?  Does saying it do anything to make it so?

This past year, I heard a number of respond to an offensive comment or action by saying, "This isn't who we are," or "This isn't us."  For example, when Donald Trump said that we should ban all Muslim immigrants from entering the United States, Paul Ryan didn't just argue with the policy.  He said that it wasn't "reflective of our principles, not just as a party but as a country".  That response became a refrain throughout the year.  When a number of racist comments were posted online by high school students after the election in November, our County Executive gathered the community together and talked about how great Howard County is.  He then mentioned the racists comments and posts and declared, "This isn't us."

These kinds of statements are supposed to end arguments.  You can argue about how best to solve a problem but you can't argue about who we are.  We're all just supposed to know that, on a deep, cellular basis.

The problem for me is that every time I hear the statement "This isn't who are are," I want to argue.  I mean, if someone in our community does or says racists things than part of who we are as a county is racist.  Even if someone said, "This isn't who we want to be," or "This isn't who we aspire to be", I'd want to say, "Really?"  I'm not sure how helpful it is to talk about what we wish people were like.

All good organizing is based on reality, on the facts on the ground. Elections are helpful for this--even when we don't like the results, we can benefit from knowing what millions of people in our country agree to or want.  That's the basis for our next steps--not our beliefs about what people should want or believe.  In general, the time we spend expressing shock that someone dared to say something or do something is wasted time.  They've said it.  They've done it.  That's the world we live in.

But I am my father's daughter.  On any given day I am likely to declare myself a "New Kirk".  This time of year, in particular, I want to declare my independence from who I've been in the past. I want to take advantage of the clean slate of a new year even if it is just a fiction of the calendar.  So I wonder, instead of declaring "we are better than this", what if we proclaimed that we WILL be better than this, starting now? What if someone in this county filled with "Choose Civility" bumper stickers said, "Okay people, let's start over.  We clearly haven't chosen civility in this county.  But we can--starting now.  Let's figure out how actually to choose to treat one another with civility this year."

Then let's really have the conversation about all the things we've been avoiding talking about throughout the ten years of the Choose Civility campaign: racism, fear, social segregation, economic segregation, etc. etc.

Happy new year pastor Heather! I always read your blogs via email but never actually come to the website to comment. I enjoy them quite a bit. So after reading this, my questions would be how do we choose civility when it's not reciprocated? And I guess in what ways (examples) can we help raise consciousness in others who have valid reasons against being what we want them to be?

Thank you! I believe that we need to "sit in the darkness" for as long as it takes to see who we are as a community. With raised consciousness, we can then choose to change and become the community we want to be. Otherwise, instead of choosing it would be like Neo (in The Matrix) brushing off the notion that society was actually a system enslaved by machines, instead of choosing to expose the system and see it for what it truly was. When we listen to multiple perspectives about things that matter, we can increase our awareness of what is actually going on, and then we can choose to move forward from the darkness and "remove the barriers to the light." Reminds me of this poem: http://weavings.upperroom.org/2014/03/what-to-do-in-the-darkness/
When I read your call to "have the conversation about all the things we've been avoiding...," I hear a call to "sit in the darkness." Thank you for your work and spirit, Heather!