Not There Yet.
Handle With Care 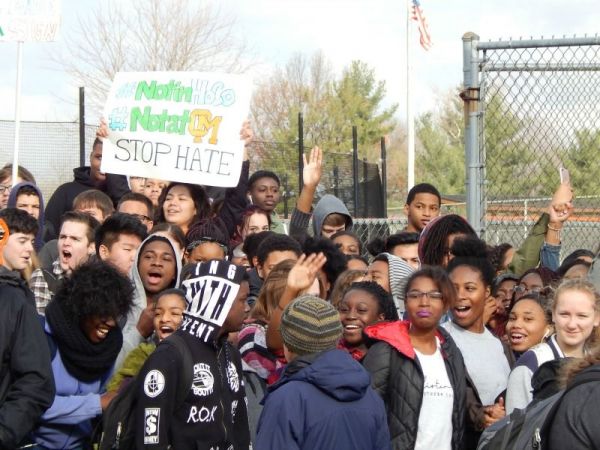 "Did you hear about the Oakland Mills walkout?" a fellow clergy person asked a group I was a part of this week.  "Four hundred kids walked out of class and the principal went crazy!"  I was surprised by his comment since I watched Principal Orlando stand at the gate to the athletic fields and greet the kids as they convened there for their protest. My daughter told me that as they re-entered the school, her principal told her, "Great job!  I'm proud of you!"

Maybe Principal Orlando was just relieved that everyone went back to class when the protest was over.  Maybe she was proud that all the speakers had stayed "on message" with no one veering off from their administration-approved script.  No one had mentioned the name of the offending student.  No one criticized the administrators of the school.  Everyone stayed positive, proclaiming their school to be a place where racist comments and threats will not be tolerated.

But maybe Principal Orlando recognizes that sometimes, disruption can be productive.

The walkout was precipitated by a threatening post directed towards African-Americans made by a student at the school.  The offensive post was not an isolated incident.  Other students in other parts of the county have posted pictures (and earlier this year, a video) that also made threats and/or used racial slurs.  And as everyone knows, the on-line activity of these teenagers pales in comparison to the hateful things adults (including, I'm sure, some who live in Howard county) do and say on line. As this kind of activity becomes more common, more mainstream, we are in serious danger of getting used to it.

The OMHS walkout was a clear statement that at least within that one high school, hate will not become normal.  It will not be something we get used to.  And disruption of the the regular school day, disruption in the regular order of things, is a very important part of making that statement clear to everyone involved.

A week ago, I participated in the #OneHoward community forum convened by County Executive Allan Kittleman.  I thought the forum was fantastic--a wide variety of people from the county spoke, and their comments were thoughtful and complex and engaged.  A big part of why that happened is that early on in the forum, a friend of mine got upset when  David Anderson, the pastor of Bridgeway Church, showed a video interview with one of the high school students who made an offensive post. Other friends noticed her distress and together they disrupted the forum.  Yes, there was shouting and tears and pointed fingers.  But the topic of the forum--a rise in racist and religiously intolerant activity in our county--is very upsetting.  As long as everyone smiles and talks about how we all value diversity in our community, the conversation does not matter to anyone.  Once people disrupt all that bland civility, we can start having a productive conversation about how we can face into what is really going on.

I left the forum encouraged, but the comments that I've read on line and heard in person since then depressed me a bit.  "I heard that forum was a disaster," friends said.  "I bet Kittleman will never hold another one."  Several people told me that they are hoping other forums will be "better organized".  I'm glad the conversation is going to continue, but I hope the takeaway from last week's #OneHoward forum is not that our conversations about race need to be more controlled.  I hope we remember that disruption is sometimes exactly what is needed.

Yes!! Discomfort is what we need sometimes to challenge our own thinking, our own understanding (or lack thereof) of others feelings. Reading and listening and being uncomfortable made me realize I was wrong....and helped me grow as a result. I hope I experience more discomfort along the way...feeling comfortable to me now means I have no room for growth.