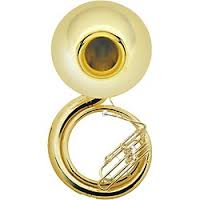 A few years back, on the first day of high school marching band camp, my son Paul had a long-time wish come true. After two years of struggling to get a decent sound out of a fiberglass sousaphone, Paul was presented with a brand-new, still-wrapped-in-plastic, shiny brass sousaphone. His band director had only one thing to say as he gave Paul the sousaphone: “Just don’t dent it.”

You can see where this story is headed, right? Paul did not drop it—he makes that point whenever he hears me tell this story. He was seated with it that afternoon and it just kind of slid off of him and onto the ground. The sousaphone fell no more than three feet so it is surprising how much damage Paul was able to cause. It had a total of five dents, including a large visible one in the bell. It was my job to take it to Baltimore Brass for repair, and I sat in the lobby for over an hour as two technicians hammer away at the instrument. In the end, they were able to repair about 70% of the damage. I told the repair guy the story of what happened, thinking they’d join me in one of those “kids do the darndest things” kind of chuckles. But he just gave me a stern look and said, “Tell your son this is why we don’t give you shiny new things.”

Those words have been on my mind these past few weeks. At times the whole world seems like that sousaphone to me—shiny and beautiful but surprisingly easy to dent. It seems unwise that we should be entrusted with any of it. Think of the natural world--flowers and butterflies, exquisite works of art, can be crushed by anyone who steps in the wrong spot. One small change in an ecosystem upsets every other plant or animal in that system. Small changes in air temperature or ocean temperature or in the chemistry of a stream or a bay make it impossible for some species of plants or animals or fish to survive. And then there are the people around us. We know how delicate our own spirits are—how an unkind word from someone close to us can send our mood crashing, how thoughtless remarks from years ago still wound us. Why would God ever entrust a bumbling, careless group of people like us with a world like this one?

And then there are babies. When I had my first babies (twins, at that) it seemed unwise that anyone who let us go home from the hospital given how helpless they were and how incompetent we were. We read our baby books and so we knew about all the things that could go wrong. The more we read the more incredible it seemed that anyone at all survived the first six months of life. I mean, baby horses can stand up minutes after birth. They can walk within an hour of birth. But human babies? They can’t even manage their own head for four months or so. And look at us. We can’t keep hold of a tuba for a day without denting it. How the heck are we supposed to handle a baby?

And yet, each year Christians tell a story about how God showed up in this world as a baby at a time before hand sanitizer or vaccines or car seats.  Was this really a good idea?  Why don’t we tell stories about how God arrived in the world as a full-grown person with a fully-equipped posse? Why doesn’t God show up in the world with superpowers, able to fly, stronger than anyone he might encounter? Or, failing that, why not wait until we’ve wizened up, until we’ve made peace with each other and figured out the cures to our diseases? Why not wait until we figure out how to handle things that are as vulnerable as a baby or a world or each other?

They cynic inside us can answer that question, I’m sure. God can’t wait until we’re ready because we’ll never be ready. We’ve been smashing butterflies and fighting wars and dropping tubas for millennia. There’s no reason to believe we’ll ever learn to act differently.

But what if God actually knew what God was doing? Put yourself into that scene by the manger. Imagine yourself holding the baby Jesus, or leaning in close to get a look at him asleep in Mary’s arms. Think of what it’s like to hold a baby. Remember how still and attentive we become, how careful and conscious and present? What if that inner softening is more than sentimentality? What if that is actually something that God wants from us?

It’s a strange idea, really. We find it much easier to believe that God wants us to try harder, to work longer, to be better. We find it easier to believe that God wants our best effort. God wants us to crack the code, to figure it out, to summit the mountain without an oxygen tank and then we’ll finally be enlightened. But what if we we’ve missed something? What if this story which is so much about softening, opening and receiving is all on purpose?

Each Christmas, Christians proclaim that God is reaching out and offering us something, something that is tender and delicate but also as study and resilient as a baby.   This is life. This is love. This is peace. This is hope. We have been entrusted with this. So stop doing for a moment. Open your arms and let Love lay its gifts there.