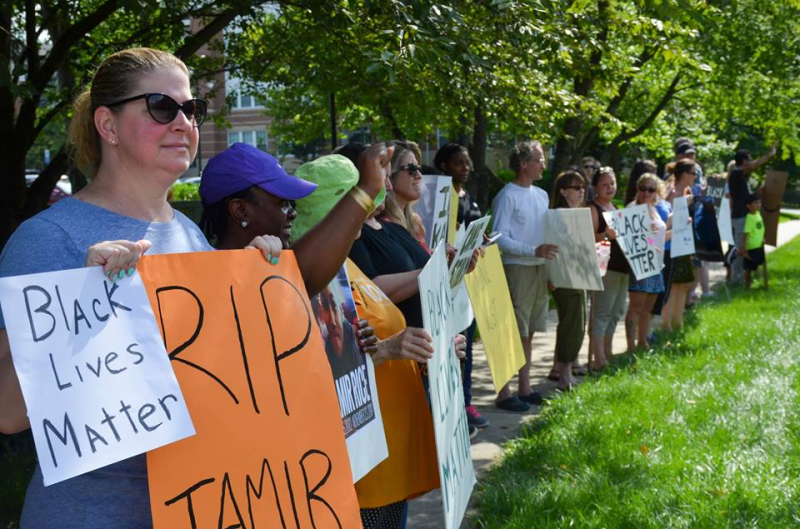 (photo by the remarkable Daniel Osborne)

This past week, Sunday couldn't come soon enough.  The shootings in Baton Rouge, St. Paul and Dallas, the deep sadness of the families of those who died, the anger on all sides and the sinking feeling that we are stuck on play-and-repeat...by the end of the week, I was drained.

But I knew that gathering with my church community on Sunday morning would help, and it absolutely did.  It helped to sing together.  It helped to read and reflect on Jesus' response to the lawyer who asked him, "Who is my neighbor?"  And it really helped to pray together with a group of people who know that however sad we get, however much we rage, however deep our despair, God will meet us there.  Those aren't just words at the Kittamaqundi Community.  That is our experience.

Then, after worship, I gathered with a group of 12 other women (ranging in age from 18 to 82) who will be leading a summer camp for girls from our own church and our partner congregation in Baltimore, Agape House.  We did some hard work together, listening and speaking the truth to each other in love.  We ended with a sense of excitement about our work together.

Then, I drove Jimmy home.  Jimmy is a treasured member of our congregation who lived on the streets for almost 15 years before we met him.  We talked about the week's news in the car and shared our reactions which were not the same.  We listened to each other with respect.

Then, I joined in with my Daughters of Abraham book group.  I got there late, but I didn't want to miss this monthly gathering of Jewish, Christian and Muslim women.  I had missed an extended conversation about the veil, but I arrived just in time for a conversation about the meaning of grace for Christians and whether there is a parallel concept in Judaism or Islam.

The bookclub ended 15 minutes early because most of the women were heading over to the Black Lives Matter demonstration a few blocks away.  We walked over together and met up with some other members of group who were already there.  I was delighted to see a number of folks from my church and others I know from school or the neighborhood.  I held a sign and waved at cars for a while but I also wandered around and talked to everyone I knew.  There was sadness and anger in the mix, but there was also a lot of positive feelings.  People were excited that so many people had come out.  People were happy to see their friends and their neighbors, and to meet the people standing next to them.

By the end of the day, I was filled up again--filled with faith and with hope.  I live in an amazing community filled with people who want to connect with each other and build a better world.

But here's the thing:  None of what I experienced on Sunday happened by accident.  The church (the people there, the kind of worship that happened) is the result of decades of intentional work.  Same with the camp.  Same with Jimmy, who I would only know (and who I'm pretty sure is alive) because of the Route One Day Center and the long hard work of Anne Dunn and many, many others.  The book club has been going for 5 years now, but only because of the sustained commitment of Ruth Smith, the remarkable woman who called it into being.

And as for the Black Lives Matter gathering, I am so aware that I benefitted on Sunday from the work, the commitment and the inspiration of other people, around the country and here in Columbia.  These protests have been happening for months and I've never felt motivated to attend.  But I was so grateful that it was already happening when I finally paid attention enough to hear God's call to show up and join in.

This is what democracy looks like.  We build it together, not by accident, but on purpose.  We have such a long way to go as a country.  There is so much work to do are we are all so tired of working on these problems.  We have to stop and cry sometimes, alone and together.  But then we get back to work, taking one small step, making one connection, having one conversation and then another and another. 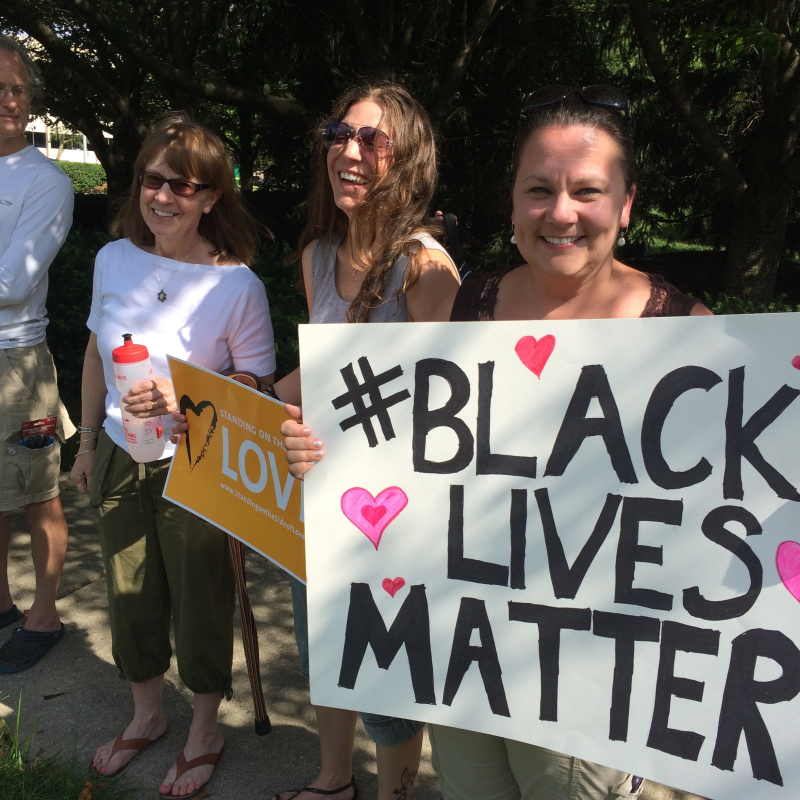 (This photo is mine--my favorite from the day.)

Finding a Way to Talk About These Hard Things 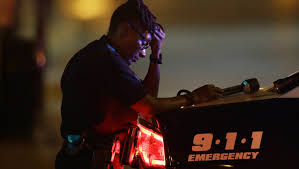 On Monday, our family celebrated the Fourth of July in part by watching the movie, "Free State of Jones".  The movie is based on a fascinating true story about a poor Mississippi farmer, Newt Knight, who worked as a medic for the Confederate Army.  In 1862, he deserted, disgusted by the news that men who own more than 10 slaves are exempted from military service.  He eventually found safety with a group of escaped slaves, and attracted other deserters as well.  In time, the group took control of Jones County, Mississippi and seceded from the Confederacy.

The story doesn't end with the end of the Civil War but continues 15 years into Reconstruction and the rise of the Ku Klux Klan.  This makes the movie less coherent and significantly more disturbing to watch.  By the time we left the theater, I felt like the movie lasted much longer than 139 minutes.  It wasn't a great movie, but I was glad I saw it.  I won't soon forget what I learned or what I felt.  I'm very glad movies like this one are getting made with big-name actors and shown in major movie theaters.  More honest movies about the history of race in our country can only help us have more honest conversations.

The shootings that followed this week reminded me that the violence and malice so vividly illustrated in the movie are not over and done with.  President Obama put it beautifully in his remarks on Thursday:

To be concerned about these issues is not political correctness, it’s just being American and wanting to live up to our best and highest ideals.  And it’s to recognize the reality that we’ve got some tough history and we haven’t gotten through all of that history yet. And we don’t expect that in my lifetime maybe not in my children’s lifetimes that all the vestiges of that past will have been cured, will have been solved.

Today, as we try to recover from the trauma of this week's shootings of civilians and policemen, everyone seems to be saying, "We've got to find a way to talk about this."  But how do we possibly do that?

Falcon Heights, Minnesota and Baton Rouge, Louisiana are very, very different places.  I am sure that the police departments for these two cities are very different as well--different cultures, different kinds of training, different personnel, different leadership.  But the fact that police officers from both departments were involved with very similar situations helps me to remember that there is systemic racism in the mix here.  And the racist comments made by the disturbed man who shot the policemen in Dallas makes it clear that it isn't only white people or police who are shaped by systemic racism.

Systemic problems--systemic evil--is particularly hard to talk about, in public or private conversations.  We find it much easier to talk about why individual people have biased views or act in biased ways.  We can even imagine how particular leaders can cultivate bias within their organizations.  But what about a bias that is cultivated and perpetuated by our culture as a whole, that seeps into every organization and every interaction?  How can we begin to get a hold of that?

It seems to me that we often need a "third thing"--a cultural artifact of some kind--to get the conversation started and to keep it going.  Movies. Television shows. Magazine articles.  Or even books.

Each year, the Maryland Humanities selects a book for a state-wide book club called "One Maryland One Book". This year, they chose a Young Adult novel called "All American Boys" by Jason Reynolds and Brendan Kiely.  The book is about an encounter between a white police officer and a young African-American man that ends in violence.  The chapters alternate between the voice of the Black kid who was assaulted and a White kid who is friends with the policeman.  It isn't high literature, but it does a solid job portraying different points of view.  In the end, the book makes it clear that police brutality is unacceptable, but it doesn't make any one person or group the villain.

Public libraries and school libraries all over the state will be promoting this book in September and October.  The authors will be speaking at the Baltimore Book Festival and at several events for high school kids.  Our congregation, in partnership with Columbia Town Center, is planning an neighborhood book discussion.  It seems like an excellent opportunity to do some of what everyone knows we need to do--talk about our history and begin the hard work of building a better future.