It Takes a Village to Hit High C 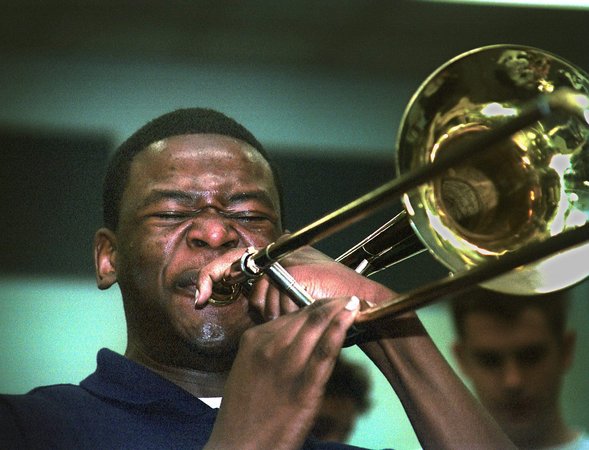 Randy was still buzzing with excitement from playing two shows with the Columbia Orchestra over the weekend.  The program included Mahler's Second, the "Resurrection Symphony".  Randy told us, "On Saturday night, I hit a high C on the trombone!  I hadn't been able to do that as I practiced the music on my own, but with the help of the whole brass section, I nailed it!".  He was discussing this experience with another brass player after the concert who assured him that many people have had a similar experience (note:  I tried to fact-check this on the web but came up empty).

There is "something about playing with a group" that enables music to happen. Now, I know from personal experience that ensemble playing cannot make up for an individual's lack of skill or lack of practice.  In fact, an player who is off pitch or off rhythm can pull a whole group down.  But music is one of the many experiences in life where the whole is greater than the sum of its parts.

I'm fascinated by the experience of community--and the connections between experiences of community and our spiritual life and understanding.  Maybe I'm making up for the first two or maybe three decades of my life when I put a high value on individual achievement, standing up against the crowd and finding your own unique voice.  I still value those things, but more and more I recognize that my greatest personal achievements were only possible because I was part of a community.  My list of things that were possible because I was part of an ensemble includes:

In each case, I improved not because I took a class or read a book or had a mentor.  I grew as a person because I was around people who (1) believed in me and loved me and (2) were serious about learning and growing in their own lives.

This past Wednesday night, I got together with four other women for pizza and beer on the patio of Union Jack's.  I doubt anyone who saw us there that night would have called what we were doing "spiritual".  But that group of women (and two others who were sorely missed Wednesday night) have agreed to travel together this year, "bearing witness" to each other's lives.  We are honest with each other.  We give each other room to tell the truth.  We refuse to give advice--no lecturing or fixing allowed.  When something sad happens to one of us, we cry together.  And when something great happens, we all celebrate.  Week after week, we hit the relational equivalent of high C.  What a gift.

Republicans, as a Progressive Christian, I Share Your Pain

A friend of mine recently posted on Facebook a screen shot of comments about atheists made by people who call themselves Christians.  Some suggested that we should "kill them all and let them see for themselves that there is a God".  My friend who shared the screen shot noted, "This is why I became an agnostic. This, apparently, is the 'love' Christians speak of. Why should I believe in your god when you can't even follow your own tenets?"

This isn't, of course, the only time I have read or heard things like this.  On a fairly regular basis, I hear someone complain about a heinous act someone committed or bigoted comment someone made and I brace myself for the comment that often follows:  "And he/she calls himself/herself a Christian!"  As a Christian pastor, I find it nearly impossible not to feel implicated by these comments.  I am not only identified personally with my religion--my professional role suggests to many people that I am a representative of the religion as a whole.

For years, whenever I was confronted with the stupid things some Christians say or do, I felt the need to explain that people who do such things aren't really Christian.  Jesus Christ, the founder of our religion, told people to "love one another as I have loved you", and modeled a compassionate, forgiving, boundary-crossing love in all he said and did.  I would quickly add that I am a Christian who, like Jesus, sees every person alive as God's beloved child, deserving of respect and love.

In other words, I defended my identity as a Christian by denying that anyone who disagreed with me could be a sincere disciple of Jesus Christ.

But a few years ago, I had a realization.  The Christians who make exclusionary, hateful statements genuinely believe that theirs is the true expression of the Christian faith.  They have Bible quotes and interpretations and entire theological systems to back them up.  I may not agree with their interpretation, but I can't deny that they are Christians.

So maybe that means I'm not a Christian?  I've considered this possibility.  I went through a phase of calling myself "a follower of Jesus" instead.  But then I got mad.  Why should I let someone else take charge of that identity?  Why should they be the ones to define Christianity to the rest of the world?

But if I'm a Christian AND those judgmental jerks are Christians too, I had to admit we had something in common.  They read the same scriptures as me, they come to the communion table just as I do.  I decided I needed to find a way to express more than contempt with people who disagree with me.  I have to find a way to engage with them.  Our common identity as Christians is not a mistake--it is a challenge and an opportunity.

For months, I've heard Republicans disavow Donald Trump.  He's not a "real" Republican.  He's "hijacking" the party.  This isn't the party I know and love.  This isn't my father's party.  I recognize that line of thinking.  If I could only explain to people what Republicans are really about, they would come to their senses and dump Trump.  But that strategy hasn't worked.  Registered Republicans in 28 states have selected Trump to represent their party in the general election.

So now, Republicans who don't like Trump, who don't agree with his positions, have to make a decision.  They could decide to stop calling themselves Republicans.  I imagine some will do this--they'll become "Independent" or they'll join a third party like the Libertarians.  But I hope that most Republicans--including the elected leaders of Howard County and the state of Maryland--will make a different decision.  I hope they will say loud and clear, "I am a Republican--and I don't agree with Donald Trump because I'm a Republican."  Go on to say what that identity means to you.  Engage Trump supporters as a fellow Republican and make a case against allowing him to define the party--in this election and in the decades to come.