Follow-up: How Are Religious Leaders Speaking Out About This Election?
The More People Who Vote the Better

Your Grandmother Lois and Your Mother Eunice and Now You 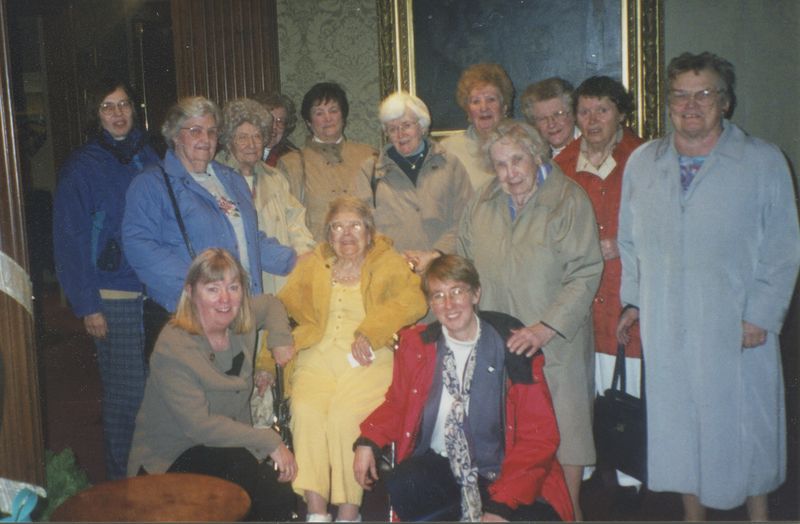 When I was ordained 21 years ago, I put a verse from Second Timothy on the front cover of the Order of Service.  It read, "I am reminded of your sincere faith, a faith that lived first in your grandmother Lois and your mother Eunice and now, I am sure, lives in you."  My own mother is named Elaine and my grandmothers were Lillian and Marian, but I would like to think that I share something with the recipient of that ancient letter.  I would like to think that some portion of my faith is an inheritance from the women who came before me, my biological and non-biological mothers and grandmothers.

A couple of weeks ago, right in the midst of the flurry of activity that precedes Easter in our congregation, I received word from an old friend in Massachusetts, Beckie Hunter, that Lois MacDonald had passed away at the age of 87.  Lois was a member of a Wednesday morning women's Bible study that I held just about every week for seven years at the First Congregational Church of Somerville, Massachusetts, the first church I served after I was ordained.  There were a lot of older folks in that congregation, and to be honest, I started the Bible study so that I wouldn't have to call on each of these women individually all the time.  But I ended up really loving the community we created together.

There were a lot of characters in the group.  Many of them had families, children and grandchildren, but all but two were widows by the time I knew them.  There were also a number of women who had never married.  For all of them, the church was their primary community and source of support.  They visited each other in the hospital, brought each other meals and sent each other cards for all sorts of occasions.

Lois was one of the single ladies in the group.  She had a beau at one point, but he died in World War II, and she would sometimes make cracks about all the competition there was for the men who survived the war.  Her father died when she was a young woman so then it fell to Lois to care for her aging mother.  She did so for years while working as a librarian.  By the time I arrived at First Church Somerville, Lois had become the primary caretaker of another single church lady.  Doris Edgar was about 20 years older than her, a kind of adopted mother.  Doris had such a forceful personality that it took me a while to get to know Lois as her own person.  She was a helper, someone who looked for ways to be of service to people around her.

When Lois realized that a young woman in our congregation was taking the bus to church each Sunday, she offered to drive out of her way to pick Beckie up, even though it meant coming to church early so that Beckie could go to choir practice.  This went on for several years.  Sometimes, they went to lunch after church and during one of those lunches, Lois asked Beckie if she would be her "Power of Attorney" and her "Health Care Proxy".  I asked Beckie this week why she had agreed, and she wrote, "I said yes because I worked for a law firm in HR and had some idea what needed to be done, and it seemed like a “some day” sort of thing, and because Lois was so good to me, and there was no one else.  I’m a helping person too."

Well, "some day" came earlier than either Lois or Beckie expected.  Lois broke her hip when she was 75 and was never able to live independently again.  Beckie sold Lois' car, broke up her household, took over her finances and began making medical decisions.  And they weren't easy decisions.  Risky surgery at one point.  And at the end, it was Beckie who signed a "do not resuscitate" order and sat at Lois' bedside as she died.  There was no one else.

Beckie was not related to Lois--a fact that she had to awkwardly explain on countless occasions over the past 13 years.  But then again, she was.  She was part of Lois' church family, a relationship that can be hard to explain.  There is friendship in the mix, of course, but there is also something deeper, a kind of faith that is expressed not in words but in deeds.

This kind of caregiving has fallen almost exclusively to women.  It is women's work and, I think, an expression of faith that has not been given the recognition it is due.

Next week, the Revised Common Lectionary directs churches to read a story from the Acts of the Apostles (9:36-43).  It describes a miracle performed by the Apostle Peter--he brings a woman who had died back to life.  But the part that strikes me about that story every time I read it is the description of the woman who is named Tabitha (in Aramaic) or Dorcas (in Greek).  "She was devoted to good works and acts of charity," we're told.  After she has died, she is surrounded by widows who show Peter "tunics and other clothing" that Dorcas had made.

The Bible, like most ancient texts, primarily describes the experiences of men.  So when stories like this one from Acts appear, I have a sense of peeking through a door at another world, one that is inhabited by women, one where women's experience shapes how faith is practiced and understood.  If we pay attention, we come away valuing not just Peter's miraculous touch but also the community of women who cared for each other, clothed each other, and held out hope for each other.

What a blessing it would be if some of that sincere faith, the faith of our grandmothers and mothers, continued to live in each of us.

This is just a very beautiful post and a very wonderful tribute to Lois. May her soul rest in peace.

My experience is that such a community of faith does live on in our church. I look at how we cared for Marie and Meg and Jan in their dying process and Iris as she transitioned to another State and me during my chemo and radiation and those are only the examples that come quickly to mind. There is such a "faith of our grandmothers and mothers" community in our church. Praise God!

What a beautiful story of faith, friendship and selflessness. A great way to start my day!