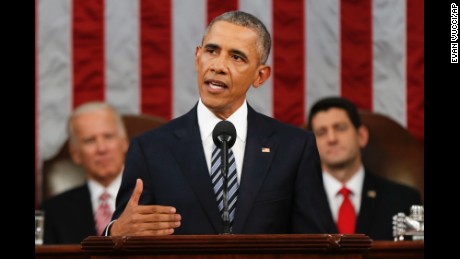 Last night's State of the Union address started off predictably. President Obama talked about the achievements of his administration and offered a few comments about things he would like to accomplish during his last year in office.  He told people they should calm down and not worry so much about the economy or the threat of terrorism.  I was reading Facebook and Twitter as he spoke, so I was only half listening.

But then he said something I've never heard a president say in a State of the Union speech before.  He said that he has some regrets about his presidency.  He has not been able to bring a greater sense of unity among the political leaders of the country.  Over the past seven years, the animosity between parties has gotten worse, not better.  Last night, Obama didn't just blame his political opponents for these divisions.  He took some of the blame himself:  "There's no doubt a president with the gifts of Lincoln or Roosevelt might have better bridged the divide."  He went on to talk about the importance of interpersonal trust, saying that democracy requires it.

I certainly believe humility is important.  And I think it is always a good idea to acknowledge that all parties contribute to a conflict rather than portraying oneself as an innocent victim.  But I don't know what to make of Obama's suggestion that our political problems are the result of the moral failings of the people involved.  Is that really true?

Several Washington Post writers seem to think so.  The inside headline of the Washington Post's analysis of the speech read, "A concerned president assesses the nation's character."  Pushing the point, Dana Milbank in the Post this morning to call the speech "a sermon to the nation" and concluded, "The president was late to find his moral voice, but it was important that he spoke."

But the WaPo editorial board had a different take on it:

Mr. Obama acknowledged that partisanship has worsened during his presidency and accepted a share of blame — but said correctly that goodwill and leadership alone cannot repair the situation. It will take systemic reform, he said, to change the tone and substance of American governance.

“We’ve got to end the practice of drawing our congressional districts so that politicians can pick their voters, and not the other way around,” he declared; gerrymandering makes Congress less responsive to the will of the majority of Americans. Mr. Obama insisted that Congress should find ways to restrict the untoward influence of money in politics. And he said it should be easier for Americans to vote.

I lean more to this kind of analysis.  In my experience, people understand themselves as striving for high ideals and acting out of good motives.  Suggesting that people "should" be better does very little, in my experience, because most of us are already the heroes of our own story.  People change their behavior not because they somehow improve their character, but because they discover that their behavior is no longer getting them the rewards they are seeking.

Obama hinted around the edges of this last night.  He criticized those who would blame our nation's problems on people of another race or religion saying, "This isn't a matter of political correctness.  It's a matter of understanding just what it is that makes us strong."  In other words, this kind of rhetoric isn't just morally wrong--it is a tactical error.

It may seem odd to hear a minister say this, but I think we should stop talking so much about improving our character and instead focus on the best tactics to confront the problems that are most pressing to our country.  My point of reference here (and in many other settings) is Robert Wright's work on game theory.  (If you're not up for his books "Non-Zero" or "The Evolution of God" at the moment check out his TED talk).  Not only does Wright reinforce my belief in the power of context in shaping our morality, but he helpfully delineates between zero-sum problems (if I win, you necessarily lose) and non-zero-sum problems (either we both win or we both lose).

Elections are zero-sum problems--only one person can win.  But most pressing problems that our politicians have to address once they are elected are non-zero-sum.  Either we all beat global warming or none of us do.  Terrorism, global pandemics, economic growth are all issues that require global cooperation.

So how do you elect people who are going to be able to work together with people they don't agree with to find solutions?  Obama got it exactly right:  redistricting reform, campaign finance reform and voting rights.  When politicians have to bring together diverse groups and interests in order to get elected, they become the people with the kind of character our country needs.