Another Gift of Community: Learning How to Grow Old Gracefully
Put Yourself in the Way of Beauty

The Speech by MLK That We Should All Read 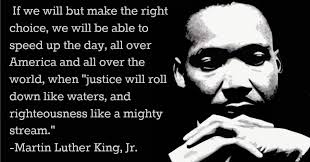 In my sermon at the Kittamaqundi Community yesterday morning, I started off talking about the wedding at Cana when Jesus miraculously transforms water into wine and ended up discussing the Syrian refugee crisis and random shootings in our country.  In the middle, I spent a bunch of time talking about the speech Martin Luther King gave at Riverside Church in New York City on April 4th, 1967. In retrospect, I might have taken on a bit too much.  For that, I'll blame King, who demonstrated in that speech his unwillingness to stick with a single topic.  (If you'd like to hear a recording or read the text of the sermon, it will be posted on our church's webpage soon.)

The speech was entitled, "Beyond Vietnam:  A Time to Break the Silence".  I read and listened to the speech last week as I was writing my sermon and I still can't stop thinking about it.  Tavis Smiley produced a two-part special about the Riverside speech for PBS which aired in 2014.  The series was called "MLK:  A Call to Conscience" (watch it here and here).  Smiley makes the argument that this is King's most significant speech, the one we should be studying and discussing and reciting in school assemblies.

I'm inclined to agree, not because it is King's most rhetorically brilliant or captivating speech--it isn't.  King didn't even write the speech by himself (Vincent Harding wrote the first draft) and he uncharacteristically stuck with the text, word for word, as he spoke.  But in the speech, King makes it clear that you cannot be a passionate advocate for racial justice at home without caring about justice and equality for people in every country.  You cannot advocate non-violence in our country without challenging our promotion of violent solutions to international conflicts.  Our moral commitments have a way of spilling over their containers.

Read this speech and you'll find yourself considering problems that are pushing at your conscience (to use one of King's favorite words).  Where are you feeling called to speak or act?  What can you no longer stand to be silent about?

Those are the questions that brought me to gun violence and refugees, issues that seem enormous and intractable.  King's words challenge me to connect these issues to my faith, the value I place on peace and the confidence I have in the power of love.

As you remember King today, consider these words which came toward the end of King's speech at Riverside Church, delivered exactly one year to the day before his assassination:

A genuine revolution of values means in the final analysis that our loyalties must become ecumenical rather than sectional. Every nation must now develop an overriding loyalty to mankind as a whole in order to preserve the best in their individual societies.

This call for a worldwide fellowship that lifts neighborly concern beyond one's tribe, race, class, and nation is in reality a call for an all-embracing -- embracing and unconditional love for all mankind. This oft misunderstood, this oft misinterpreted concept, so readily dismissed by the Nietzsches of the world as a weak and cowardly force, has now become an absolute necessity for the survival of man. When I speak of love I am not speaking of some sentimental and weak response. I am not speaking of that force which is just emotional bosh. I am speaking of that force which all of the great religions have seen as the supreme unifying principle of life. Love is somehow the key that unlocks the door which leads to ultimate reality. This Hindu-Muslim-Christian-Jewish-Buddhist belief about ultimate -- ultimate reality is beautifully summed up in the first epistle of Saint John: "Let us love one another, for love is God. And every one that loveth is born of God and knoweth God. He that loveth not knoweth not God, for God is love." "If we love one another, God dwelleth in us and his love is perfected in us." Let us hope that this spirit will become the order of the day.

We can no longer afford to worship the god of hate or bow before the altar of retaliation. The oceans of history are made turbulent by the ever-rising tides of hate. And history is cluttered with the wreckage of nations and individuals that pursued this self-defeating path of hate. As Arnold Toynbee says:

Love is the ultimate force that makes for the saving choice of life and good against the damning choice of death and evil. Therefore the first hope in our inventory must be the hope that love is going to have the last word (unquote).