Jim Rouse's Best Idea for Columbia Ever
My Mission for 2016: Defeat Despair 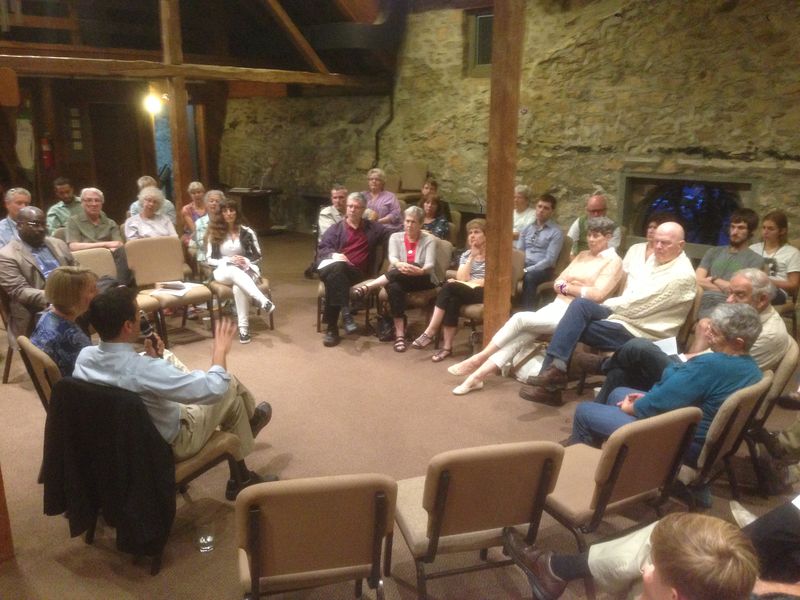 Last night, an amazing thing happened at Oliver's Carriage House, the beautiful building in the heart of Columbia which is home to the Kittamaqundi Community.  Thirty-nine people sat in a circle and had a respectful and thoughtful conversation about the proposed nuclear deal with Iran.  Information was presented in a clear, straightforward way by a person with deep knowledge of the issue.  He was clear that he is an advocate for the deal but did not belittle those with opposing views.  People listened well and asked excellent questions.  I think it is safe to say that everyone left feeling better equipped to talk to other people, including their elected representatives, about the issue.

It felt like a miracle.  The debate around this deal has become so heightened, so ugly, that it is tearing groups apart, especially within the American Jewish community.  It has become a favorite talking point for several Republican presidential candidates who have vowed to nullify the deal on their first day in office.  Not a single Republican Senator or Representative has come out in favor of the deal and the debate in Congress promises to be ugly.  But last night, Jews and Christians, Republicans and Democrats, friends and strangers all sat down and thought it through together.

I noticed something last night--It felt safe enough in the room last night to ask really basic questions.  When did the sanctions against Iran start?  Who imposed them?  Who, exactly, conducts inspections?  How, exactly, do you dispose of uranium?

When politicians or advocates are debating each other in print or on television, they whiz past questions like these.  Those of us listening are left with a sense of vague sense that we don't really know enough to form an opinion of our own.  So we walk away and give up, or just side with our favorite politician and argue incoherently with the other side.

Which brings me to affordable housing in Howard County.

I have lived in this county for ten years.  Since we first arrived, there has been public discussion of the re-development of downtown Columbia.  The inclusion of housing for people from a range of income levels has been a part of those plans from very early on.  Now that redevelopment is underway, one thing that is noticeably absent is affordable housing.  Why is that--and what can we do to make sure that affordable housing does in fact get built?

I have been trying to understand what's happening with these issues for almost a year now.  I have been to County Council meetings and PATH meetings.  I have talked to developers and advocates who I know.  I've had an extended email conversation with my brother-in-law who is a professor of real estate economics.  I admit I have very little background in real estate or housing policy, but I am not a dumb person and after all my study I still can't figure out why the first plan for affordable housing downtown didn't work and what is the best way to go forward.

Perhaps this is a clear indication that housing policy should be left to the experts.  But this issue has a big impact on my life and my community, so I want to weigh in.  I don't want to just stand by the side of the road and hold up a sign (been there, done that).  I want to know what I'm talking about.  And for all the meetings and public forums I've been to on this issue, there has been very, very little public education about what kinds of tools are currently in use in this country to provide a broad spectrum of housing options within a community.

Time for another community conversation at Oliver's Carriage House?