My Neighborhood Needs a Challenge Day
Connecting with "Our Kids"

The Power of Being Part of a Bigger Project 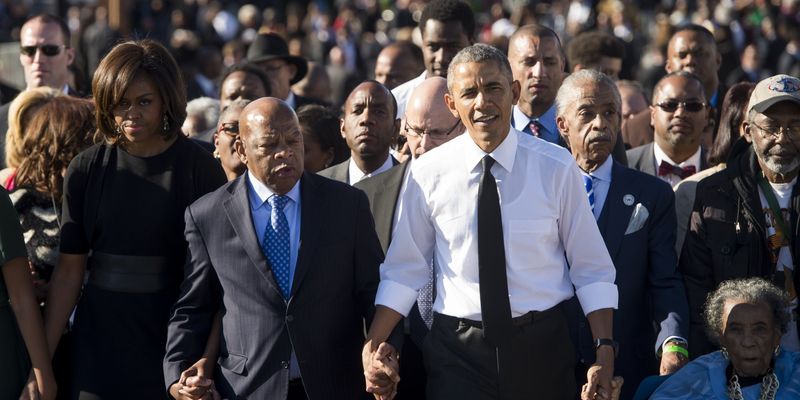 President Obama's speech this past Saturday in Selma was compelling--if you haven't seen or read it in full, check it out here. The occasion, of course, was the 50th anniversary of "Bloody Sunday" when hundreds of non-violent protesters for voting rights were attacked by Alabama state troopers as they marched across the Edmund Pettus Bridge.  I still had images from the movie "Selma" in my mind when I saw the pictures of Congressman John Lewis, one of the organizers of the original march, walking arm-in-arm with Barack and Michelle Obama across that bridge in celebration.  It was a striking and powerful reminder of the progress that our country has made.

Obama could have easily have left it at that.  He could have declared victory and spent the day patting the back of everyone who had been involved with the civil rights movement.  But he didn't do that, in part because the report on the Ferguson Police Department which was released last week made it clear that there is still a lot of work to do to eliminate racial discrimination in this country.  Obama also made it clear that the Voting Rights Act itself needs to be strengthened through congressional action.

But the part of Obama's speech that really touched me wasn't his call to complete the work that the marchers started.  Obama linked the struggle for civil rights in this country to "the American experiment in self-government".  He didn't just connect the fight for racial equality with other fights for equal rights and equal opportunities.  He connected it with the spirit that makes our country "exceptional":

For we were born of change. We broke the old aristocracies, declaring ourselves entitled not by bloodline, but endowed by our Creator with certain unalienable rights. We secure our rights and responsibilities through a system of self-government, of and by and for the people. That’s why we argue and fight with so much passion and conviction, because we know our efforts matter. We know America is what we make of it.

And then he called on everyone in the United States to continue the work of improving our country.  "Selma shows us," he said, "that America is not the project of any one person."

On Sunday morning, I was thinking about Obama's speech when I read the story that was on the cover of the Washington Post Magazine profiling three "Irrepressible Women", each of whom is now over 80, all of whom have had positions of great influence in Washington, D.C.  The subtitle read, "They had no movement, no support group, no 'lean in.'  They just worked to the top."

The article was very kind to these three amazing women, one of whom is a "close friend" of the author, Jodi Enda.  I appreciated reading about the variety of jobs during World War II and noted the credit two of them gave to Jimmy Carter who made it a priority to appoint more women to high-level government jobs.  But I wondered about the headline's claim--do they really see themselves as individual actors who worked their own way "to the top" without the support of anyone else?  It seems as if they do.  By the time the feminist movement became an organizing force in this country, they already had achieved success.  Did they mentor other women who came after them?  The reporter never asks.

I have a feeling these women could tell a different story if they chose to.  There may not have been an official women's movement to support them as they began their careers, but they were certainly encouraged by someone, inspired by someone, goaded and challenge and consoled by various people along the way.  Maybe there is something about being a "pioneer" that encourages you to view yourself as "self-made".

But I prefer Obama's view of the world.  I would like to think that the spirit that makes someone think that they can make a difference in the world is one that we inherit from people who have come before us, people who we may not be related to, people whose struggles may have been very different from our own.  Obama linked the civil rights protesters to Lewis and Clark and Susan B. Anthony and the Lost Boys of Sudan and the cowboys who opened the West.  By doing so, he linked everyone listening with that community of struggle and challenged us to draw strength from all the fights that have already been won and to draw inspiration to continue the work of building a more perfect union.