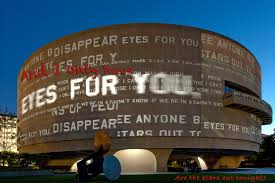 I have so enjoyed the past three sessions of "Creating Columbia", a "mini course" on the early history of Columbia offered by the Columbia Archives and led by Barbara Kellner.  The most recent series of three classes is being offered again on three consecutive Thursdays, beginning on April 30th.  Unlike the series I attended, this time around the classes are offered in the evening.  I recommend them!

The subject for the session I attended this past Monday was, "Jim Rouse Juggles the Big Picture and Details".  More than the previous sessions, this one gave me a sense of what Jim Rouse (the founder of Columbia) was like as a person.  Barbara had collected a wonderful series of memos and stories that illustrated Rouse's involvement with little details like the decision to rent a film projector instead of purchasing one.  But she also offered some illustrations of Rouse's capacity for Big Ideas, including some which were truly out-of-the-box.

My favorite was this one:  Rouse had apparently been involved with conversations between the Baltimore Museum of Art and Joseph Hirshhorn, the financier who had amassed over the previous decades one of the largest private art collections.  When it became clear that the BMA was not going to become the recipient of the Hirshhorn collection, Rouse started thinking.  On January 19, 1966, he write a letter to Charles Parkhurst, the Director of the Baltimore Museum of Art, and suggested that the new community he was creating in Howard County could, as a whole, become the new Hirshhorn museum.  He asked Mr. Parkhurst to forward his ideas to Mr. Hirshhorn which he supposedly did.  Whatever Hirshhorn thought of the idea, he decided in the end to give his collection to the federal government.  A new Smithsonian museum was the eventual result. 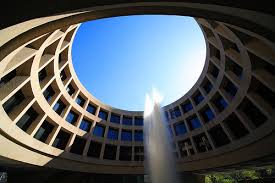 Barbara Kellner kindly send a copy of the letter Rouse wrote which reads in part:

Suppose the entire city of Columbia became the museum for the Hirshhorn collection!  Suppose the main plazza at the edge of the lake in the heart of downtown was the sculpture garden.  Suppose there was a permanent gallery designed into the main, enclosed mall retail center so that great art was brought elegantly and intimately into relationship with the marketplace.  Suppose each of the nine Village Centers had small galleries and each of the nine Village Greens small sculpture gardens so that the collection was moving continually through the whole city.  Suppose that art education in the schools, the junior college, and the university was integrally related to the collection.  Might this not be an opportunity to infuse the population of a new city with great art in a way our country has never known?  Might not such a development revolutionize in America the relationship between art and people?  Might not this idea be so new and challenging that it would attract resources to assure the execution of such a plan at the highest standards and with the greatest possible effectiveness?

It really gave me a laugh to think of Hirshhorn's collection hung in the Columbia Mall--perhaps on those portable bulletin boards that they use for the exhibit of art made in the schools each year.  But then I realized I had it backwards.  Can we envision the Hirshorn Museum at the center of Columbia--with a Sears, a Macy's and a Nordstom's attached to the side?  What if the elevators to the food court looked like the ones at the Hirshhorn museum?  Best. Idea. Ever. 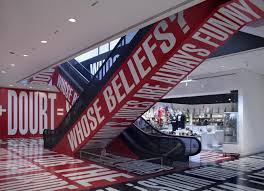 When I moved to the area in 1978, Columbia was developing, but had Mr. Rouse's artistic includes all around. I remember a few that have been removed after the control of Columbia passed from his Enterprise Corporation to the General Growth Corporation.

I loved the unique traffic lights that hung horizontally over the roadways on wonderfully curved poles that displayed the lights left to right. I remember the Rusty Scupper building with its beautiful bright wood and glass structure. I would order scrod fish and enjoy the wonderful view over the lake!

I used to enjoy the clock tower at the lake center with bell chimes every hour and more. Sitting in the benches around the lake, these clock sounds came right through the gentle spring summer breezes.

The Columbia Center had nice little things about Columbia in plans, bike paths, neighborhoods, sales and even a short movie about Mr. Rouse's Columbia in a small theater.

There were neat unique restaurants scattered around, each one special from the Rusty Scupper to Mrs. Z's.

The Columbia Center displayed in the development plan, a Symphony Woods with picnic tables scattered in the park like setting with the Merriweather Post Pavilion that was said to be the other home of the Baltimore Symphony Orchestra offering music during lunch and evenings occasionally where citizens could bring a basket and enjoy beautiful music in these woods, free as these were just practice sessions for the BSO. Now we have no picnic tables and only very loud pop music, much with no discernible tune since this beautiful citizen's park was turned over to serve the Commercial Music Business known as Nederlander Organization where no citizens allowed unless attending a paying concert of loud music. Not particularly artistic.

Then there was "The Mall" unique in itself with so many useful stores like a hardware store, a model shop, a record shop or two, camera stores, several varied restaurants right in The Mall. Now, it's all clothing stores and related accessories. Sears is downsizing by 300 stores and may close. Remember the Bunpenny, Jade Palace and The Bagette?

The "People Tree" icon of Columbia served unprotected all these years until recently, this icon is being changed to something else, no matter, the issue is that the People Tree is so interwoven into the grand idea that was Mr. Rouse's for the Columbia Community. This important icon has been lost to common usage and to other business concerns now, so change comes to original Columbia Plan. I worry that our People Tree is also on the "removal" list.

The original size planned for Columbia was to finish at 90,000 citizens but now upsizing to maybe 125,000 with many more dense structures in Town a Center. So much for the Columbia Covenants. Buildings were limited to 8 to 10 stories then, but now buildings that challenge 12 stories or maybe upwards of maybe 20 stories are likely being made part of an "Urban" plan for a new Columbia that started with new ideas like "on-street" parking around the Town Center areas adding much congestion. Many, many beautiful trees lining the streets and "open spaces" have been removed. Mostly, "Developers" argue that Columbia needs to be more "Urban" somehow.

There are other memories that escape me now, but just allow new arriving citizens to know that much of the Columbia Artistic Heritage has been lost by Howard County and new Columbia Management since Mr. Rouse's passing. Columbia is likely changing into an urban city where much of Mr. Rouse's original plan is lost in the interest of commercial merchandising strategies and high density housing and very crowded roads encouraged mostly by developers that never seem to see Mr. Rouse's Columbia Plan as being completed.

Such a cool thought! We should be thinking that big in Columbia now.

The Oakland Mills Interfaith Center does make an effort:
http://www.themeetinghouse.org/#!__gallery/icda