My Neighborhood Needs a Challenge Day 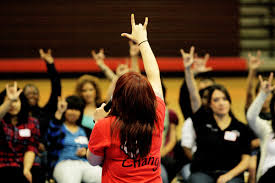 My daughter Rosa has been looking forward to this day at Oakland Mills High School for weeks--thank goodness it wasn't a snow day.  On Tuesday, Wednesday and Thursday of this week, OMHS is hosting "Challenge Day", a day-long program for high school kids and adult mentors which includes games, small group sharing, large group activities and lots of hugging and crying.  The program run by an organization called (not surprisingly) Challenge Day whose mission is to "help people learn to connect" to each other.

I have to admit I was skeptical that Rosa would get much out of the day.  Rosa has been involved with some very high quality, very thoughtful youth programs over the past several years, most of them sponsored by the Quakers.  She's been in "fishbowls" and given affirmations and established group covenants.  So sometimes, when she participates in leadership training or team building activities, she has a sense having "been there, done that".

Instead, she came home buzzing with excitement.  The day had involved about 100 kids, most of them Freshmen and Sophomores, but some Juniors and Seniors as well.  There were about 25 adults participating as well, teachers and administrators from the school as well as a few parent volunteers.  They started out with a lot of high energy games and mixers, but eventually divided into groups of four or five kids (who were not already friends) and one adult.  The kids were encouraged to share more of their "real self" with the group through some well-defined exercises.

In the afternoon, the conversation expanded to include some large group work around social stigma, trauma and oppression including the "cross the line" activity that is one of the group's signatures.  "Cross the line if you've ever been teased or made to feel ashamed about the way you look."  "Cross the line if you or anyone in your family has been a victim of a violent crime."  "Cross the line if you or someone in your family has been affected by alcohol abuse."  As kids step across a line and turn to face the kids on the other side, the leaders remind the kids again and again, "No one crossed this line alone.  You are not the only one."  Lots of hugs followed and lots of tears. 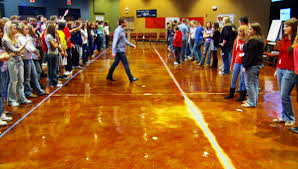 And they didn't leave it there.  They got kids to apologize to each other and to thank each other.  They made commitments to build a better school together.  They left with the strong conviction that they have the power to change the world.

I am so glad the high school is hosting this program but I really do wish it was open to every member of this community.

Our family has had a great experience in the Oakland Mills neighborhood.  We ended up here almost completely by chance--we needed to buy a house in Columbia, we looked at three and made an offer on the one we thought we could afford.  We ended up on a great street with great neighbors, walking distance from three excellent schools.  We wish the housing market hadn't crashed shortly after we closed on the house, but besides that, we have no complaints.

But over the past year, I've come to realize that many people who live in Oakland Mills have complaints.  A LOT of complaints.  They feel the neighborhood has declined, that it has become a "ghetto" or a "slum".  They don't like how some residents behave.  They feel like a lot of people are neglecting to maintain their homes.  And they are frustrated that more people aren't involved in efforts to improve the community.

I've thought a lot and talked a lot to friends about how to change the tone of this conversation.  It feels counter-productive--like we are pitting one group of residents against another and creating exactly the kinds of dynamics that lead people to disengage from their neighbors.  I worry that constantly focusing on the problems in a community actually amplifies those problems.

When you get adults to strategize about this, it involves meetings and plans and candidates and occasionally blog posts.  But now I'm wondering--maybe we've gone about this all wrong.  Maybe we need some big gatherings with ice breakers and games and a "cross the line" exercise.  Maybe we need someone to stand up in a group and tell everyone to hug three other people.  Maybe we need to play seated volleyball with a giant beach ball and then introduce ourselves to someone who is different from us.

I'm not actually joking.  This stuff works.  Who's up for the challenge?

As a classmate of Rosa's my son also participated in Challenge Day this week. I, too, was skeptical about what he would take away from the experience. I, too, was thrilled to find that he came home thrilled by the experience. The experience he had was exactly what they are trying to create. He couldn't stop talking about it and, yet, couldn't quite put into words how amazing his day had been. What a great opportunity. I agree that the community as a whole could benefit from the program but I would be happy if they could start with all the students and even the middle schools. So proud that OMHS took this on.