The Kindness of Strangers
Repair Begins With Relationship

On Being Both Inside and Outside a Community 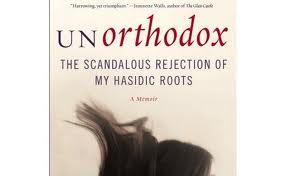 It's a snowy day here in Columbia and a couple of my appointments for the afternoon were cancelled.  Yesterday I picked up next month's selection for my Daughters of Abraham book club:  "Unorthodox:  The Scandalous Rejection of my Hasidic Roots" by Deborah Feldman.  I was just going to read a few chapters today, but somehow ended up reading the whole book, more or less.  Somehow, a snowy day calls for such excesses.

I do admit to skimming a bit in part because I found the book disappointing.  The author describes her early life in an extremely rigid, insular sect of Hasidic Judaism in vivid detail but seems emotionally cut off from much of it.  When she remembers her grandmother's baking Feldman can conjure up a little warmth, but for the rest of her narrative she is bored or confused or faking her response to a situation.  The book had the feeling of being written too soon after her departure.  She had to extract herself emotionally from her community in order to leave and she wasn't yet able to really put herself back in.  The result is a memoir that seems to hover at the surface of the story.

The feeling that Deborah Feldman best describes is one that defines her life from an early age:  she feels like an outsider, even when her life is completely defined by the Hasidic community.  While all the other girls in her class at school live with their parents, she lives with her grandparents.  Her father, their son, is mentally handicapped in some way and unable to care for her.  Her mother seems to have left the community, although we hear almost nothing about her.  So from an early age, Feldman feels like she must work to be accepted by the people around her.

At the same time, she is drawn to books which she is forbidden to read--novels in English like "James and the Giant Peach" then "The Chosen" and eventually "Pride and Prejudice".  Feldman never explains how she got into the habit of reading these banned books when her grandfather prohibits her to even speak in English.  But these books capture her imagination and give her a sense of inhabiting worlds beyond her own.  They give her a way to step out of the Hasidic community while at the same time staying in.

Deborah Feldman's family does seem unusual within her community, but I have a feeling she was not the only one around her who felt like an outsider.  In my experience, everyone wonders if they really belong, if they are really accepted, even those who everyone else considers insiders.

For Feldman, the only way to find peace was to eventually leave the community completely.  But once out, she admits that she struggled to feel at home in the secular world.  It took her a long time to let go of the feeling that people were staring at her, noticing her because she was clearly out of place.

Most of us don't need to take such a drastic step because we're part of communities which are much more open to difference.  But there is still work to do to make our peace with the question of whether we really fit in.  Instead of struggling to conform completely to what a community seems to expect or value, we have to recognize that everyone fits in some ways and doesn't fit in others.  When we recognize that no one else fits in completely, we can relax about the parts of ourselves which don't exactly conform.

At least that's what I'm telling myself today.

I love the Kittamaqundi Community and feel deeply connected to the amazing people there.  But having stepped out of the community for four months for a sabbatical, I'm realizing it isn't all that easy to step back in.  Over the past week, it's become clear to me that part of the problem is energy.  I feel refreshed from my time away, filled with ideas that I'd like everyone to buy into and want to try.  But a lot of people in the church--especially those in leadership positions--are in a different place.  While I was away, they poured their energy into sustaining the community and now, frankly, they want a break.

I'm listening...and adjusting my plans for the immediate future.  And I'm thinking about how I can stay close and connected to the community while also not being completely in sync with it.  It helps to remember that I've stood in many places with one foot in and one foot out, and whenever I've been in that position I've discovered that I am not alone.