Grief Would Kill Us If It Weren't For Community: Reflections of Big Hero 6
Lessons on Community from the Cross Country Team 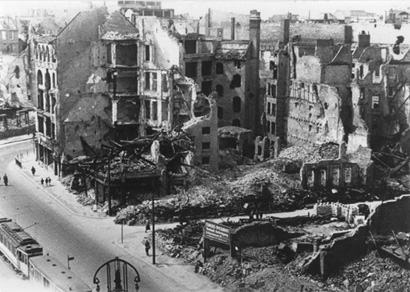 There aren't a lot of military veterans in our family.  On my father's side, the Quakers were pacifists and tended to avoid military service as conscientious objectors through payment or alternative service.  On my mother's side and on Dan's side, the stories we were told focused on our ancestor's efforts to flee war, not to prosecute it.

Dan's great-uncle Milton was a notable exception.  At the age of 38, he enlisted in the Army as a private to serve during World War II.  As I understand it, his left-wing political leanings were considered suspect and so it took awhile for him to be deployed.  He commanded an infantry company towards the end of the war in Europe and then served for several years as a Major in the military government of post-war Berlin.

When Dan and I were dating and first married, we visited Milton a number of times.  He was in his 90's by then, living in Greenwich Village with Suzette, his long-time French "companion".  Our very first visit made the strongest impression on me because within five minutes of entering his apartment, Milton was showing us the collection of photos he took in Berlin during his service.

The photos were small, black and white but crisply focused, like an etching.  Accompanied by Milton's narration, they were profoundly disturbing.  Every image was of destruction--homes with walls blown off and their inner rooms revealed, streets filled with rubble and burned-out cars and trucks, opera houses and grand government buildings all destroyed by bombs and fire.  In each photo, there were people.  Children playing on the destroyed streets, whole families living in destroyed homes, old men sitting on the steps of buildings that no longer exist.

Every structure in Berlin during those days was unstable, Milton told us.  Every day, several collapsed, usually killing the people who were living or working inside.  Milton and other American soldiers ran the ambulances, but they were usually too late.  Rations were meager for German civilians and starvation was common, especially during the winter.  We looked at photo after photo.  Milton wanted us to see what he had seen: war and its terrible consequences.

Thinking about the relationship between grief and community makes me think of Milton.  The stereotype I have often heard of his generation is that they rarely talk about their negative experiences of war.  The famous Grant Study which followed the lives of men who were Sophomores at Harvard between 1939 and 1944 found that the stories they told about their experiences during World War II became more positive over time.  They would talk about how much they grew through their experiences, how close they felt to others they fought alongside, etc.  The few whose story did not change were those who had been traumatized by their experience.  They couldn't integrate their wartime experiences into the story of the rest of their lives.

Perhaps that describes Milton.  He didn't remember war fondly but he remembered it clearly.  Within five minutes of meeting me, he showed me what he had seen.  I'm grateful for to him for that, and for every other veteran who does the same thing for their family, their community.  War is filled with stories, and even the painful ones need to be told and heard, seen and remembered.

Heather, I spent a great deal of time with Uncle Milton across four plus decades but never saw the Berlin phots. Lucky you and Dan. Milton was what I would label a Romantic Realist. He knew what was happening but, at the same time, liked to imagine a better reality. Wonder what cousin Robert Dawidoff would offer as commentary on this blogpost which, by the wy, I like a lot.