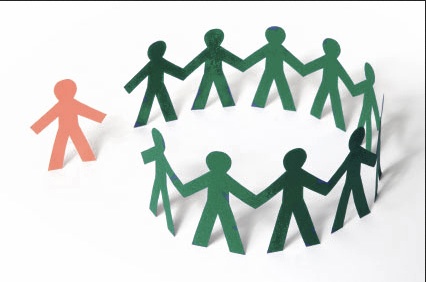 I’m a big fan of the NPR show “On Being” (formerly, “Speaking of Faith”) hosted by Krista Tippet.  I listened to the podcast of the most recent show while running yesterday morning and an exchange towards the end of the interview has been on my mind ever since.  The interview was with Michel Martin, the host of the recently cancelled NPR show “Tell Me More”.  As the conversation focused on the vision Michel Martin had for that show, she said this:

MS. TIPPETT: In any given moment...

MS. TIPPETT: ...in any given situation.

I’ve by writing a lot about community these days.  In fact, since I’m on sabbatical, writing about community is my full-time job.  It is great to have the time and the space to step back and reflect on some big picture questions including, “How do we hold both our need for safety and our need to risk in community with each other?” and “How do we come together to create a sense of shared identity without relying on exclusion of the Other?”

But after some hours immersed in the Big Questions, I find myself coming up for air and asking, “What practices can we embrace right now that will help us develop healthy communities?”  In the end, I’m not really a philosopher—I’m a pastor, which means that the only ideas that matter are the ideas that can be applied to my life.  Starting now.

So what are the practices that create community?  I’m working on a list, and I would welcome suggestions.  But I’m sure that one key practice is the one Michel Martin calls her “real charge to people”:  Ask, who’s not here?  And try to invite that person.

This question has lurked around the edges of a number of groups I’ve been involved with.  When I first got involved with Emergent Village, a group that attempted to foster conversation among “emerging leaders” in the Christian church, I was struck by how few women were involved in the conversation or invited on stage at some of the early conferences.  I connected with some other women who shared my concerns and with the help of a generous anonymous gift we formed the Emerging Women’s Leadership Initiative.

A group of five of us set off planning a national gathering of emerging women leaders, drawing up lists of names of all the women who we wanted to invite.  It didn’t take us long to realize that everyone on our list was white.  We gulped.  We looked over our list again.  Every single person on the list had something important to offer and we had limited space at our event.  It was really painful to notice who wasn’t on our list but once we did, we knew what we had to do.  We put our event on hold and started to reach out, look for new contacts, call friends of friends and ask for more names.

When you are all charged up about the event you’re envisioning, you do not necessarily want to do that work.  I didn’t really want to do it with the Emerging Women’s Leadership Initiative.  It took a lot of time.  It involved awkward phone calls to people I didn’t know.  It made me feel embarrassed that I didn’t already have a wider range of relationships.

At Tuesday night’s Re-vitilizing Oakland Mills Town Hall Meeting, my husband, the brilliant and dashing Dan Kirk-Davidoff, raised his hand and asked one of the first questions:  Is there anyone at this meeting who lives within the newly adopted boundaries of the Village Center?  In other words, are the people who would be most affected by this plan represented at this meeting?  One Village Board member raised her hand and one audience member raised his hand (and since I happen to know that person, I know that he was actually mistaken).  When Dan pressed, the chair guessed that about 3,000 people live within the new boundaries, about one-third of the population of Oakland Mills.

Obviously, there were a lot of people who weren’t there.

What to do about that?  The Board chair, Bill McCormack, had a plan to meet with the owners of all the included apartment complexes and he was willing to suggest that these owners notify their residents about the changes (note:  these new boundaries have been approved by the board, so these “meet and greets” with property owners are for the purpose of informing them about action that has already been taken, not soliciting input).  Mr. McCormack did emphasize that this conversation has been going on for a year and there have been multiple meetings open to the public.  This plan has not been developed in secret.  If anyone who lives in the included properties had been motivated to give input, they would have been welcome to do so.  I don’t doubt this is true.

Dan felt more outreach is needed.  He suggested leafletting the affected buildings, knocking on the doors of some apartments and asking residents to respond to a short survey, handing out response postcards with check off boxes.  These are all great ideas and would have been particularly helpful if they were done last year when the conversation started.

But my experience has convinced me that there really is only one way to broaden participation in a conversation.  The people who are already in the conversation, the people who really feel motivated to address the issues involved, need to personally talk to people who have not been represented so far.  The fact that people aren’t showing up and participating does not simply mean that the publicity hasn’t been effective (although publicity is important and necessary).  It means that the relationships aren’t there.

Imagine this scenario:  After a preliminary conversation on Tuesday night at the Town Hall meeting, everyone in the room is given an index card and asked to write down the names of everyone they know who lives within the new Village Center boundaries.  If they don’t know anyone, they write down the people they know who might be able to introduce them to someone OR they brainstorm ways in which they might be able to initiate a conversation with someone.  Then, a date for a second Town Hall meeting is set and each person commits to coming back with at least one resident from the affected properties.

Perhaps this sounds ridiculously idealistic.  Some may assume that the people leading the “re-vitalization” conversation don’t want anyone from the apartments involved because those people would most likely disagree with their efforts.  But I really am not sure that is the case.  No one wants to live in an unsafe neighborhood.  No one wants to live in an apartment which isn’t well-maintained.  No one wants strangers loitering in their entryway and trash overflowing from dumpsters, etc.  Everyone wants the best possible opportunities for their children.

In order for any of the re-vitalization dreams for Oakland Mills to come true, there is going to have to be a significant amount of pressure put on the County and on the Columbia Association to invest in our community.  The more people who are behind these plans, the more effectively we will be able to advocate for them.

As we shift from complaining about problems to advocating for solutions, we need to deepen our connections as a community so that we can broaden the conversation.