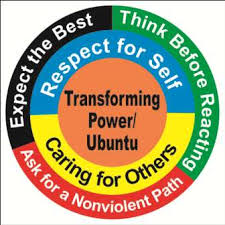 As I wrote yesterday, I recently participated in a weekend-long training in the Alternatives to Violence Program, held at the Patuxent Correctional Institution, a men’s prison in Jessup, Maryland about 15 minutes away from my house.  I’ve heard about AVP (as it is called) for years and have long been interested in being trained as a facilitator in the program.  I was excited to take the first step towards that goal, but a bit surprised by the content of the program.

I think what I expected was something along the lines of a cognitive-behavioral approach to anger management.  I thought we’d focus on techniques for calming down inside—deep breathing, counting to ten, etc.  I figured we’d learn communication skills, practice listening to another person’s concerns and acknowledging their feelings.  I thought we’d go over the difference between being assertive and being aggressive.  In short, I thought the program would be very concrete and very specific.  When you are in situation X, take the following three steps.

We did very little of this.  We did work on communication skills by listening without interruption and saying back what we heard the other person say.  We also spent some time formulating “I statements”.  But before we learned any techniques, we were divided into small groups and asked to describe situations where we had found an alternative to violence.

This ended up being a fascinating conversation.  My small group included two volunteers from outside the prison and three inmates.  The other volunteer and I struggled to come up with a story to share.  We ended up talking about experiences where we had to interact with volatile people who got very loud and agitated when they felt confronted or challenged.  We talked about the things we did to stay calm ourselves in the face of their anger and to de-escalate the energy of the interaction.

It was clear to me that actual violence really wasn’t an issue in either of our stories.  We weren’t worried about being physically assaulted by the person we were dealing with.  Non-violence, in our experience, meant making an effort to keep our interactions calm and pleasant.

The inmate’s stories were completely different.  They all talked about confrontations with guards where they felt themselves wronged or disrespected.  They described the dispute and said at the moment they seriously considered assaulting the guard, hitting him in the face and more.  In each situation, they had instead given up their fight, walked away or shut up. One inmate said he decided to “give the win” to a guard by backing down from an argument.

Non-violence, in their experience, meant taking a loss.  At times circumstances required them to do that, but it wasn’t something they could feel good about.

When we came back together as a large group, each small group shared one story that they felt was a good example of an alternative to violence.  Several groups told stories of inmates “taking a loss” instead of fighting.  Finally one of the inside facilitators, spoke up.  Sitting very still and speaking in a quiet voice he told the group, “There is another alternative besides winning or losing.  It’s the alternative to violence that this program is all about.  It’s called Transforming Power, and I can tell you that when you experience it, it is a truly amazing feeling.”

Transforming power was a concept that hovered around the edges of the rest of the weekend’s conversations.  It was never even specifically defined other than to say that it is a third way beyond “fight” or “flight”.  It was not presented as a technique or a strategy or a set of practices.  Rather, it was described as an experience that can emerge from inside of you, as an “inward power” or an “inner sense of what’s needed” that is “courageous and without hostility”.

I found this remarkable, and upon reflection, decidedly Quaker.  At the heart of Quaker spirituality is the belief that each of us has access to an “inner light”, a deep wisdom that connects us with the divine.  What’s more, our interactions with each other are improved when we recognize “that of God” within each person.  One of the “Guides to Transforming Power” posted in the room read, “Reach for that something in others that seeks to do good for self and others.”

On the basis of this belief, the Quakers crafted a program for violent offenders.  Instead of telling inmate that there are things they need to learn, techniques they need to master to correct their negative behavior patterns, AVP insists that these same inmate already have access to a power that will enable them to find a non-violent alternative.  They have an inner guide who can be trusted.

The one handout from the weekend listed 11 points under the title, “Help Along the Way” including: “Ask yourself for a non-violent way.  There may be one inside you,” and, “Trust your inner sense of what’s needed.”

Lest we conclude that the practice of non-violence is a private, individual matter, the tenth “help” reads, “Make friends who will support you.  Support the best in them.”

AVP had been evaluated a number of times and the results of these studies are posted on the program website.  There does seem to be real evidence that the program reduces the incidence of violence in the prison.  This is significant since AVP is offered in hundreds of prisons in the United States and in prisons throughout the world.  I think it is a safe guess that AVP is the most popular violence prevention program in the American prison system, largely because it is led by volunteers and does not cost a prison anything.

So what is it about AVP that makes a difference?  Other volunteers in the program assure me that as the workshops continue, more skills are introduced and inmates have more and more opportunities to practice these skills.  Every inmate who expresses interest in becoming a facilitator is encouraged to complete that training and to co-lead future workshops.  All the inside facilitators meet together on a regular basis and continue to improve their skills and understanding of non-violence.

In short, AVP is a kind of subculture within prisons.  The people who have been through training together share a bond with each other.  They identify as members of a group that has something important to offer.  The inmates are simultaneously encouraged to claim their own authority as non-violent leaders and connected to a network of other people who feel like they can make a difference.

I long to do something to address the culture of violence that seems to permeate our culture.  I don’t want to just keep things peaceful around me by avoiding volatile people and staying calm.  I want to engage in conflict with creative energy, confident that there is power available to me that can transform the situation.  I want to feel like I’m part of movement, a sub-culture.

Then, when I read stories of killings and beatings and beheadings I will cry and rage but I won’t despair.