How to Be a Christian Without Going to Church 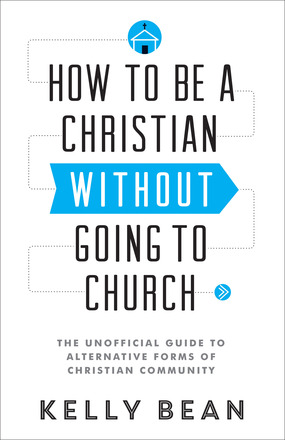 A couple of weeks ago, a group of about 20 people gathered on my back deck to talk about a book called, "How to Be a Christian Without Going to Church" by Kelly Bean.  It was an interesting mix of people--a couple of church planters, a half dozen pastors, some people who have been involved with house churches, some graduate students from Catholic University, some people who work for local seminaries and some local bloggers.  I invited people who I thought would be interested in the questions raised in the book--and who I thought might help spread the word about it by sharing thoughts on social media or talking with friends.  Kelly is a long-time friend of mine and I wanted to help her promote her book.

This might seem like a strange choice for someone who makes her living serving a church.  In fact, when I told my husband Dan, a climate scientist, about my plans for the evening he asked, "Isn't that kind of like me hosting a discussion on why global warming is nothing to worry about?"  But I have reasons to be interested in Kelly's book even beyond my friendship with Kelly.

The Kittamaqundi Community has at best a tentative relationship to the word "church".  We were formed by people who were looking for an alternative to traditional models of church.  The heart of our community life are small groups which often meet in the homes of members during the week.  Even our Sunday morning worship grows out of small group conversations.  When our long-time Enabling Minister Jerry Goethe was dying, he came back and gave a final admonishion to community--don't become a church!  Don't focus on offering a place for people to "go to church" on Sunday morning.  BE the church, out in the real world, seven days a week.  I take the fact that Kelly included two stories from KC in her book as some evidence that we've taken Jerry's words to heart.

Kelly's book is both a memoir of her own experience as the co-leader of a small Christian community which gathered in her living room for several decades and a survey of all sorts of other things Christians are doing to live out their faith outside of the traditional church.  Kelly is not really a critic or an analyst--she is an appreciative observer of the wildly diverse ways people find to live out their Christian commitments outside of formal church structures.  She says all these expressions of faith give her hope.  At a time when there is a lot of public conversation about how traditional churches are declining in membership and failing to adapt to changes in our culture, it is encouraging to hear that there are lots and lots of people finding other ways to  live out their discipleship to Jesus, even if we wouldn't want to do it the way they do.  Experimentation and variation suggests that new possibilities are emerging even as old structures are coming apart.

Kelly's book mostly focuses on alternative ways to be church, that is, how to create or discover Christian community outside of the structures of traditional churches.  She doesn't see community as optional for Christians--but since she profiles some people who are completely confident that they can go it alone, she sometime seems to waver on this point.  Most of the time, however, she is nudging the reader to expand her understanding of what Christian community can look like.  Can we get together in a way that feels more natural, more like normal life?  Does church have to happen in a special room, with special language and special music that we don't use outside of Sunday morning?  If, instead, our church is a gathering in our living room with a potluck meal and stories of our lives, won't it be easier to connect that experience to things we do and say during the rest of the week?

I think Kelly's point is that community works best when its form closely reflects who we are, where we are.  Community, as such, is expressive our identity.

But is that all that a Christian community should be?  Gavin Ortlund's complains that the communities Kelly describes, "aren't easily distinguishable from secular social clubs".  He continues, "Jesus did not say, “Go out into the all the world, growing vegetables, doing ceramics, building napkin rings, and basically just hanging out.” He commanded us specifically to disciple, baptize, and follow him to the very end, even unto death."

Now, I think a good case could be made that discipleship to Jesus involves growing vegetables, hanging out and all sorts of other things.  It depends, in part, on who you are hanging out with and who gets to eat your vegetables.  But Ortlund has a point--Jesus commanded his disciples to do certain things together (Ortlund lists some of these like baptism, communion and worship but doesn't mention forgiving one another, feeding the hungry or caring for the sick).  These communal practices aren't just expressive of our love of each other--these practices are formative.  When we do these things with intention, again and again, they shape us in particular ways.  They make us different--they don't just express who we are to begin with.

Kelly devotes the third part of her book to describing "New Structures" created by people looking for ways to be Christians without going to (an institutional) church.  At the beginning of that section, she acknowledges that for many people there are "traditions" that are essential to Christian community.  She asks, "Can these marks of being church be met by non-going Christians when there is no paid pastor, are no preset programs, or is no institutional structure?  Are there new alternatives to carry these historical markers forward for future generations?  I believe the answer is a resounding yes."  But she is clear that while some "non-goers" want to continue these practices, others don't.  She describes both views and doesn't make a case that one is better than the other.

In the end, Kelly's aim is to report what she sees, and she does so without a lot of evaluative comments.  But her "Personal Note" at the end of the book betrays where her heart really lies.  Kelly know her life--her family--has been sustained by her community.  She knows this hasn't happened by accident.  She has poured her heart and soul into "cultivating" a time and space for people to gather in Jesus' name to do the things that Jesus did so that we might become the people Jesus called us to become.  She hasn't abandoned church and she hasn't abandoned Jesus either.  She's welcomed him home.

Getting Caught Up With the Crowd 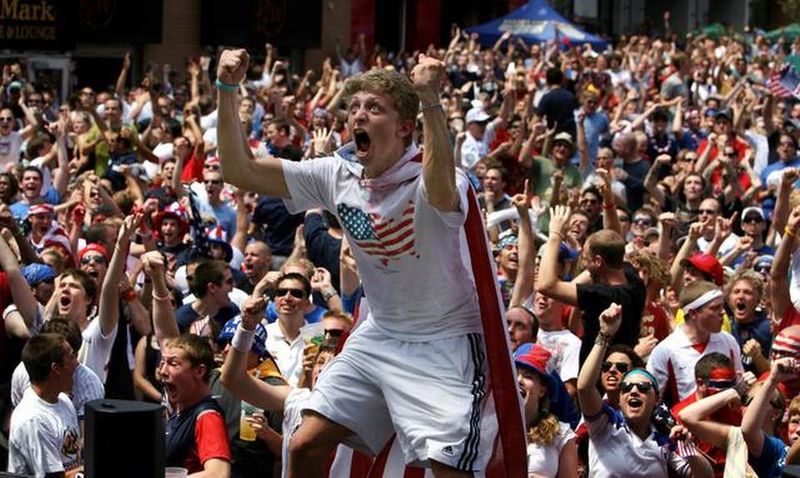 In my heart of hearts, I really don't care about the World Cup.  I don't find soccer that interesting to watch (especially when teams go scoreless for a full ninety-minute game) but more to the point, watching sports on television just isn't my thing.  So when I arrived in Philadelphia for our Youth Group's service trip last Tuesday I was a little less than pleased to discover that several members of our group had decided to change plans.  Instead of getting in a half day of work our first day, we were going to go pick up some tools, see the neighborhood where we would be working, and then drive to the Buffalo Wild Wings and watch the World Cup match between the U.S. and Belgium.

It was clear that there was no changing the decision--the kids were already psyched up about it.  So I brought my laptop with me, ordered a beer and all of the appetizers on the Happy Hour special and figured I'd make the best out of the situation.  I didn't want to start the trip on a sour note, so I had to let go of my annoyance.

As it turned out, it wasn't at all hard to enjoy myself.  The restaurant was pretty full and everyone was there to watch the game.  Televisions lined every wall and the sound was turned up pretty loud.  Every time the U.S. got near the goal, people cheered, and when they finally scored everyone was on their feet, shouting and clapping.  I quickly ditched my laptop and starting cheering along with the rest of the room.  When the clock started to run out and the U.S. needed to make one more goal to tie it up, I really started to feel anxious.  My heart was racing, my palms were sweating--all over a game that I don't actually care about.

I caught the excitement of the crowd--it is hard not to.  When we stand in the midst of a group of people who are sharing a feeling, chances are we'll start feeling some of the same thing.  Human emotions are contagious, especially in groups.

I'll be starting my four-month leave from the Kittamaqundi Community in a little over three weeks (my last Sunday is August 3rd).  In preparation for working on my sabbatical project on "A Spirituality of Us", I've been working on a "mind map", a diagram that shows the central question of my study and all the other questions that branch out from it.  (I love this part of any project--I'm much better at elaborating and complexifying than I am at focusing.)

These are tough questions for me, especially when it comes to religious life.  I've been in big worship services with loud music and felt myself get caught up in a way that isn't completely comfortable.  The music builds and builds and people are raising their hands and before I know it I'm crying.  Afterwards I feel a little sheepish.  I know I've just been along for the ride--the things I've felt aren't really my own feelings.  It's fun, but it feels like cheering for a World Cup game.  I don't really have a personal stake in what is happening.

But at the same time, I know there is a "lively" feeling in the room at Kittamaqundi that is essential to our worship.  How to explain it?

Years ago, I led worship for a small congregation in a sanctuary that had room for at least 250 people.  I sometimes felt like I was shouting in a padded cell--no matter how much energy I put out, the room seemed to just absorb it.  Leading worship at KC is a much different experience.  It feels like singing in a room with really good acoustics.  The energy I put out into the room bounces around and echos and amplifies.  People laugh or cry and that energy comes shooting up to me, nearly knocking me off my feet at times.  I know part of this has to do with architecture (the stone walls really do make the room acoustically lively) and some of this has to do with human community.  But I have a sense that there is something more to it as well.

Jesus famously told his disciples, "Wherever two or three of you gather, I will be there among you."  We sense this--the group is something more than the sum of its parts.  There is something alive among us when we are together in true community, something worth paying attention to, something that can be trusted.  This is the experience of community that shapes us in a way that lasts long after the cheering and shouting and singing ends.

But how does this kind of experience come to be?  Can I try to create it?  Or do I need to just let it arrive, unbidden?