Reflections on "12 Years a Slave" and "The Invention of Wings": The Stories We Tell About Saviors 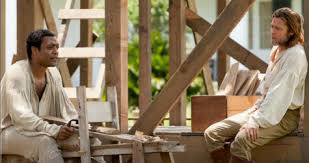 I'm making an effort to write regularly on this blog because I'm in training for my sabbatical--from late August until the end of November of this year, I will be stepping away from my usual work at the Kittamaqundi Community so that I can give my undivided attention to a research and writing project.  I'm looking forward to having the time to do some serious writing--and scared about my ability to write for many hours every day.  So, I'm building up my stamina.  And, I'm starting to think about what I'll be writing about.

My sabbatical project is entitled, "A Spirituality of Us".  Broadly speaking, I want to draw lines of connection between spirituality (which is mostly understood as a private, personal experience) and community.  I'm not just interested in applying the teachings of our faith traditions to issues in the public sphere.  I want to consider how our spiritual lives--our experience of God--are shaped by our experience of community.  While my own tradition, Christianity, is rooted in the story of an individual who had a unique relationship with God, that story involves community from the moment it begins.  Jesus gathered a group of disciples from the moment he began his public ministry and much of his teaching involved how we should treat each other in community.  The community of disciples carried Jesus' message to others who then formed communities based on that message.

Which brings me to "12 Years a Slave", the movie that won this year's Academy Award for Best Picture.  Our family saw the movie as soon as it came out--it was one of those movies that I wanted to be sure my teen-aged kids saw.  I found it difficult to watch and deeply moving.  But there was something about the story that didn't sit right with me.  It bothered me that the slave at the center of the movie, Solomon Northrup, is saved at the end of the movie by the individual efforts of a few white men.

A number of commentators have noticed this theme in American movies and written scathing critiques of the racial stereotypes perpetuated in them.  But I'd like to think critically as well about the myth of the individual savior that seems to hold such power in our imaginations.  The way we usually tell the story, groups of people perpetuate evil (as whites did with slavery) and groups of people hang in there and do the best they can to help each other survive (as blacks did during slavery).  But change comes, redemption comes, primarily through the efforts of an individual.

I read the analysis of "12 Years a Slave" that followed the Academy Award on Sunday at the same time that I was finishing up Sue Monk Kidd's newest novel, "The Invention of Wings".  I read this book with some apprehension since I've had mixed feelings about a number of Kidd's other novels including "The Secret Life of Bees".  But this recent novel is based on the lives of Sarah and Angelina Grimke, two of my personal heroes, so I couldn't resist.  To my relief, this book avoided the exact problems that make "12 Years a Slave" problematic.

I should probably write a separate post about "The Invention of Wings" and the Grimke sisters, but for now I offer this observation:  Sue Monk Kidd tells a story about the evils of slavery and the efforts of those who resisted without identifying anyone as a trapped victim or a savior.

The story is told through alternating accounts by Sarah Grimke, a white woman born to a slave-holding family who becomes an abolitionist, and by Handful, a slave who is given to her for her 11th birthday.  Both women feel trapped by their circumstances--although Kidd is careful never to equate their constraints--and both women find ways to exercise their own agency, from deceit to outright defiance.

Then, at the end of the story (spoiler alert!), Handful tells Sarah that she has decided to "leave or die trying".  Sarah rushes back to Charleston to try to save Handful by purchasing her from her mother.  Her efforts fail, but Handful has a plan of her own.  Sarah becomes her co-conspirator, not her savior, and the story suggests that Handful's future will be assured by the abolitionist community that has nurtured and shaped Sarah.

After the success of the movie version of "The Secret Life of Bees", I'm guessing Sue Monk Kidd has already sold the movie rights to "The Invention of Wings".  In the hands of the right screenwriter and the right director, this movie could challenge the dominant Hollywood narrative about trapped black people saved by individual whites of good conscience.  And that, in turn, could help us reflect more deeply about community.  Not only do we work together to perpetuate evils systems, but we work together to heal the world.

For the sake of getting conversation going, I'll stick up for "12 Years"- Solomon is shown working really hard to take advantage of any opportunity to get closer to freedom, and goes to considerable lengths to make himself known to friends. I think the fact that his own efforts fail just helps to illustrate how extraordinarily lucky he was to get free, and how different his situation was from the other slaves. The real moral center of the film is Patsy, who is doomed. The point is that slavery was a completely corrupting system that had to be extirpated by massive social upheaval. Sounds like Kidd's book is more concerned with how that upheaval came about, where 12 Years a Slave is focused on eliminating in the audience any sense that slavery was anything less than an abject evil.