Reflections on "12 Years a Slave" and "The Invention of Wings": The Stories We Tell About Saviors
Conversation with Steve Snelgrove, Part 1: Reducing Health Care Costs by Talking About Death 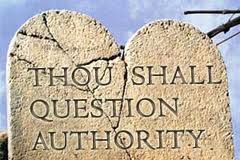 Years ago, when I first saw a bumper sticker that read, "Question Authority", I scanned it wrong.  Instead of reading that phrase as an imperative ("You should question people who are in authority"), I though the phrase was descriptive of the driver of the car ("This person is an authority on questions")  Although I believe that the imperative statement is true, I prefer my initial, incorrect reading.  In fact, this is what I strive to be every day:  a person who is good at asking questions.

I am interested in all sorts of questions, especially those that relate to the nature and purpose of human life and human community.  My religious tradition, Christianity, give me a vocabulary for asking those questions.  Story after story in the Bible describes people in conversation with each other or with God about these kinds of questions.  I appreciate that the questions and the responses to the questions are both included in scripture.  I take a cue from that to continue the conversation.

By necessity, I also ask questions about my faith tradition--its scriptures, its central beliefs and practices, its history.  I am always excited when a conversation, experience or a text spurs me to ask a question I haven't considered before.  And I'm always troubled when I encounter a question that, for some reason, cannot be asked or considered in the context of a particular community.

The fact of the matter is that such questions exist.  Every community has convictions or standards of behavior that are so foundational to that community that to question them takes the questioner outside of that community.  Some questions don't just inquire into meaning or significance.  They start to poke at questions of identity--who are we, really?  What makes us who we say we are?

Writer Ayad Akhtar is fascinated by these questions.  He won the Pulitzer Prize for Drama last year for his play, "Disgraced", a play about a Muslim-American attorney who has kept his religious identity a secret until he is decides to defend an unjustly-accused iman.  The questions the attorney asks eventually separate him from his employers and eventually his marriage.  The play hasn't been produced in the D.C. area yet, but I am hoping that it will included in next year's season at one of our region's fine theaters.

In the meantime, Akhtar's second play, "The Who and the What", has premiered this month at the La Jolla Theater in Los Angeles.  The play is a family drama about two sisters and their immigrant father, but embedded in the story are some questions about the Prophet Mohammad and the origin of the teaching about women and the veil.  Can the character ask these questions and remain part of her religious community and part of her family?

A tip of the hat to Allan Lohaus for directing me to this play and to a pre-show conversation with the playwright and author Reza Aslan which you can watch online here.  The title of the conversation was "The Human Divine:  Searching for the Person Within the Sacred".  The first part of the conversation began with both authors making the case for why exploring the human lives of the founders of a religion can be compelling and revitalizing to a person's relationship with that figure.  Jesus or Mohammad "comes alive" when we explore questions about who he was in the context of the history and culture of his time.  This has certainly been true in my experience.

But as the conversation continues, it ventures more deeply into they dynamics of identity and the questions we ask.  Akhtar says something to this affect:

At times we process things by projecting them on others.  Not everything can be understood through our own internal processes.  We require the externalization of conflict in order to process it.  Sometimes we project our greatest aspirations onto the central figures of our religious because that enables me to say I can reach that level of goodness by being like him.  We just need to be aware of this dynamic and watch out for our tendency to keep what is best in me outside of myself.

There's a lot to think about there, but I appreciate the reminder that external conflict is a way in which we process internal conflict--and not necessarily a wrong way.  This is part of what we need from community.  We work things out in relationship to each other--and that includes arguing with each other.  Too much community harmony and we lose an important tool for navigating our own internal conflicts.
As always...to be continued.