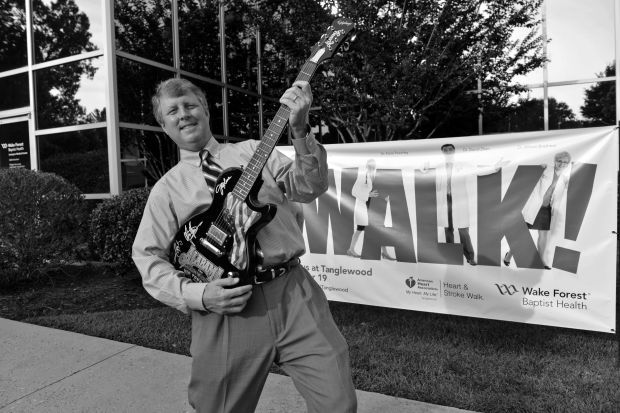 This past Friday, I had a chance to hear a short talk by Steve Snelgrove (pictured above with a guitar signed by the members of Alabama!) the new President of Howard County General Hospital, at a breakfast sponsored by Leadership Howard County.  Mr. Snelgrove said a couple of things that caught my attention in particular because they involved a partnership between the hospital and the faith community.

Howard County Hospital will be under great pressure over the next five years to reduce health care costs dues to changes in the Maryland Medicare Waiver.  Snelgrove gave some very preliminary ideas about some approaches he'd like to take to help contain and reduce costs.  The first idea was to significantly increase the number of people in the community who have advanced directives regarding their health care.  As I wrote yesterday, I think this is a great idea and one that my congregation and many others could help to implement.

The second idea involves partnering with the faith community in a more formal way.  Snelgrove described a program called "FaithHealthNC" which began during his time at Wake Forest Baptist Medical Center.  At the Leadership breakfast, Snelgrove gave a very quick description of the program:  the hosptial partnered with churches throughout the community to support patients who had just been discharged from the hospital.  Volunteers from the church make sure the patient fills their prescriptions, goes to follow-up appointments, etc.  The program successfully reduced the chance that a patient will be re-admitted to the hospital soon after their discharge--a result that has been identified nationally as essential to reducing Medicare expenses.

After describing the program, Snelgrove added this enthusiastic endorsement:  "And there's no cost to it!  These church people are just passionate about helping people."

That caught my attention.

It isn't true, of course, that the things that churches do are cost-free.  Churches require funding to support their staff and their buildings, of course, and the staff and the building facilitate the volunteer efforts of the congregation.  Large volunteer programs, inside churches and outside of them, always require staff support.  So, my first reaction to Snelgrove's proposal was skeptical.  Asking churches to do something to save a hospital money shifts the cost of health care--it doesn't necessarily reduce it.

When I tracked down the program Snelgrove was describing, I realized that there was more support to churches involved with FaithHealthNC than I initially thought.  The network provides churches with a "Health Care Liaison" who works directly with the volunteers from the church to provide the information they need to help with follow-up care.  The "covenant" the churches sign, and the training provided to volunteers, is focused on confidentiality.  This enables the Health Care Liaison to share medical information with the volunteers so that they have good information about what the patient needs.

This makes sense to me.  Every pastor and every congregation I know wants to help the members of its congregation who are sick or in the hospital.  For one thing, Jesus showed concern for those who are ill throughout his life.  He told his disciples that when they care for the sick, they are caring for him.  But care for those who are hurting isn't just a practice of Christian discipleship.  It is a function of community.  When you are connected to someone who is hurting, you hurt too.

And yet, the health care system can actually serve to separate people from their support networks, especially those who don't have family members or others who will share news about their loved one with that person's faith community.  Like many other pastors I know, I've had the experience of suddenly "losing" a parishioner, only to discover that person has been in the hospital.  And if the hospitalized person is disoriented or confused or unable to communicate clearly, it can be very hard to know what to do to support that person once they are out of the hospital.  If I could sign a covenant that would allow me and other volunteers from our church to receive medical information directly, I would gladly do it.

But is that all Steve Snelgrove was talking about?  I got the sense that the program he had in mind served people who were not part of a church congregation as well.  It sounded like the hospital would also call on a church to support people in their "neighborhood" who were in need of follow-up care.  He said that this helped the hospital and helped churches because they "want to grow their membership".

This is where things get tricky.  Can an organization assign a community to care for someone unknown to them in the way that they would care for those who are a part of their community?  Can someone get the benefits of a community simply because they've been referred to that community by their health care provider?  Can the support of a caring community be packaged into a program, detailed in a covenant and marketed as a way to reduce health care costs?

Maybe it can.  But I'm not sure it should.

There is a lot of evidence that membership in a faith community has a positive affect on a person's health.  In fact, in a video on the Wake Forest Baptist hospital website, Rev. Gary Gunderson says that participation in a congregation is as healthy for a person over their lifespan as smoking is unhealthy over a lifespan.  But he goes on to point out that this isn't just a matter of personal beliefs--this is a social affect.  People live longer, healthier lives in the midst of caring communities.

But you can't just go out and buy community for yourself or for anyone else.  Communities are a network of relationships--they are not service providers.  When people are a part of a community, they give into that community as well as receive from it.  Simply put, people who have visited others in the hospital are more likely to get visits from others when they themselves are in the hospital.  When these reciprocal relationships take place in the context of community, not everyone has to pay in the same amount because not everyone withdraws the same amount.  But the fact remains that communities are places where people help out, find a way to be of service, feel needed and get appreciated as well as places where people get help and support.  I am certain that the giving part of community participation is as much a benefit to someone's health and well-being as the receiving part.

So I'm not quite sure what to do when there are initiatives to extend the benefits of a community to those outside a community.  I believe strongly that I am called to welcome strangers and care of the person who is bleeding on the side of the road whether or not they are part of my tribe.  Along with my congregation, I've participated in lots of efforts to help people in need outside our community--brought food to people living in camps along Route One, repaired houses in Appalachia, befriended kids in West Baltimore, and this week, our church is hosting Howard County's Cold Weather Shelter.  It is a special week for our community and we take pride in offering great food and warm hospitality to our guests.

But the times I've felt we've really made a difference in someone's life are the times when a person we've met through one of these outreach programs has become a part of our community.  This has happened time and again at KC.  Several former residents of the Cold Weather Shelter have joined our church.  Several people who we first met through the Route One Day Center are now integral members of our community.

One of these members was hospitalized last month.  Our community visited him and prayed for him and sent him cards and followed up with him after he was discharged.  But I'm convinced that what really made a difference in this man's recovery was that he wanted to come back to KC to make the coffee.  He claimed that task as his job a few years ago and he doesn't really want anyone else to do it.  And we appreciate it, deeply.

At the end of Steve Snelgrove's brief talk last Friday, his reminded everyone in the room that each of us needs to take responsibility for our own health.  He put up a slide that reminded us to stop smoking, lose weight, get exercise and eat fruits and vegetables.  I'd add another point to that list:  nurture your community connections.

You can't just increase your daily allowance of community when the doctor orders it.  Community isn't something we consume or access or leverage.  It is something we create together.

Heather- I have grave concerns about putting the responsibility for reducing inpatient re-admissions and providing post-discharge follow-up on volunteers, however well-meaning they may be. We need a health care system that includes post-discharge/community support from paid professionals.