Reflections on "Frozen": Identity and Community in Tension
The Cold Weather Shelter is Nothing to Be Proud Of

Cheering for the Girl in Pink in the Back 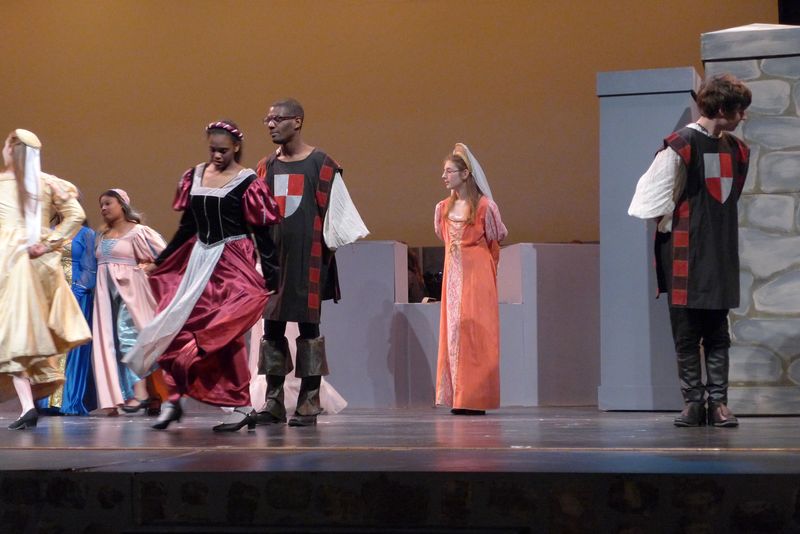 This past Friday night, I saw Oakland Mills High School's spring musical, "Once Upon a Mattress". I saw it Saturday night night as well.  And I saw the Sunday matinee.  I loved all three performances.  The show is my idea of a perfect high school musical--fun ensemble numbers, a variety of good roles, a few great songs, and it is very funny in a totally stupid kind of way.  The Oakland Mills cast pulled it off with a ton of enthusiam.  There were some outstanding singers among the leads and some very good comic actors.

But honestly, I wasn't really paying attention to the main characters in the play.  I spent all three shows watching the Lady in Waiting in pink who appeared in the court scenes at the beginning, middle and end of the play.  That was my daughter, Rosa, and this was her first-ever high school musical.

Rosa was ecstatic the day she found out she was cast in the show--it didn't matter to her at all that everyone who tried out got a role.  She quickly learned all the songs, including the ones she wasn't singing, and then she learned a lot of the lines, despite the fact that she didn't have any.  She made up a backstory for her character--gave her a name (Rosalind) and figured out her motivation for everyone movement or gesture.  She decided that the reason why she wasn't paired with one of the knights in the dance scene was because her boyfriend was a vampire and not able to appear in court.

Rosa was completely present every moment she was on stage.  She looked anxious and frustrated and jubilant at the appropriate moments.  But that wasn't really why I had so much fun watching her.  I couldn't take my eyes off of her because she's my daughter and I love her with all my heart.

Earlier in the week, I led a class on the Psalms at KC.  We were talking about what a song of praise would look like in a present day context, so I played Stevie Wonder's "Isn't She Lovely" as an example.  One of the participants told the group that she has a picture of herself holding her first grandchild right after he was born.  It had been a difficult delivery but everyone was okay in the end.  She said the look on her face in the photo can still bring her to tears--so much love, so much joy.

She told the group that she took the photo with her to a spiritual direction session one time, and her director told her, "Imagine--you are looking at your grandson at that moment with just a fraction of the love with which God looks at you at every moment!"  What an amazing thought.

This morning, Howard County's Cold Weather Shelter is moving from our church to Glen Mar United Methodist Church for the last week of the season.  Last night, as our Youth Group shared dinner and played bingo with the guests of the shelter, I had a conversation with a guest that is still on my mind.  He said the thing he didn't like about being in the Cold Weather Shelter is the feeling of being in a fishbowl.  "I hate the feeling that people are sitting and looking at you from across the room.  You guys are the total opposite of that.  You've been talking and laughing with us all week."

I know what it means to look at someone with love.  When my daughter was on stage this weekend, she was the star of the show in my eyes.  It felt to me like there was a spotlight shining just on her.  I'm guessing that every other parent or grandparent felt the same way about their kid--there were spotlights shining on each of the 45 kids in the show, and each of those kids was a star in the eyes of the people who loved him or her.

At the heart of my faith in God is my bone-deep sense that God looks on each person in the world--each baby, each child, each adult--with love so strong that we cannot defeat it.  My prayer is that today, tomorrow, every day, I might look at someone else with some portion of that love.