More Thoughts on Love and Community
Does Being a Part of a Group Make Us Meaner?

Reflections on "Her": Falling in Love with the World Wide Web 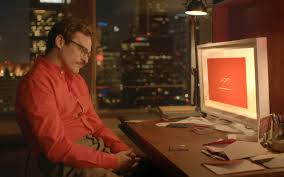 While I definitely enjoyed our Snow Days this past week, I was disappointed that the storm forced us to postpone our congregation's discussion of the movie, "Her".  I thought it was particularly provocative to have that discussion right around Valentine's Day, our national celebration of romantic love.  As we generally understand it, romantic love is something that happens between two people.  Although we use the same word in English to denote a more expansive kind of love (we "love" our country or our school or our team), we understand romantic love as highly specific.  We fall in love not with people in general, but with one person in particular.

Or at least that's how we've thought about love up to this point.  Will our understanding of love change as technology changes?

The movie, "Her", is about a person who falls in love with the very advanced Operating System on his computer.  Or rather, that's the story begins, and it is sweet and funny in a romantic comedy kind of way.  The Operating System, "Samantha", sounds and acts like someone in particular.  And "she" seems genuinely attached to the particularities of Theodore, the writer with whom she falls in love.  She appreciates his writing style and has insights about his past and present relationships.  After seeing the trailer, I thought the movie was written to make a case for this relationship.  Their love for each other isn't limited by the fact that it is "virtual"--it is real love.

But (spoiler alert!) the movie doesn't end once it has made the case for the depth of Samantha and Theodore's love for each other.  The story then develops in a way that points to the limits of that relationship.  And the limits aren't what you might think they would be.  The problem is not that a human-computer relationship is not particular enough enough to be satisfying to the human involved.  The problem is that it is too particular to be satisfying to the computer.

You can see a hint of trouble on the horizon when Theodore and Samantha seem to be at their most comfortable, most intimate.  They are out on a "double date" with Theodore's boss and his (real human) girlfriend.  They are joking about how much the boss admires his girlfriend's feet, and then the girlfriend asks Theodore what he most admires about Samantha.  He says something like, "She is so complex...she can be so many different things."

So it comes as no surprise that Samatha becomes increasingly interested in relationships with multiple levels or layers.  She talks with a reconstructed Alan Watts about six different topics at the same time.  And eventually, of course, she confesses that she has formed relationships with thousands of other humans and fallen in love with over 600 of them.  Theodore can't handle that and ends their relationship.

I love movies and have a somewhat embarrassing tendency to overinterpret the religious themes in all of them.  I won't claim to see Jesus in this movie, but I think the issue of the evolution of love has deep spiritual implications.

Long before anyone was contemplating the implications of artificial intelligence, the French Jesuit philosopher and geologist Teilhard de Chardin wrote that human consciousness (which is to say, not just knowledge but awareness and experience) is growing through a process that is analogous to biological evolution.  Love, he contended, is at the heart of that process.  In the 1930's he wrote in "The Phenomenon of Man",

Love alone is capable of uniting living beings in such a way as to complete and fulfill them, for it alone takes them and joins them by what is deepest in themselves. All we need is to imagine our ability to love developing until it embraces the totality of men and the earth.

I first read Chardin in college and retained only the vaguest sense of his main theses.  A recent episode of "On Being", the Public Radio show on "religion, ethics and ideas" brought him back to mind--and connected his thinking to recent technological developments in ways I hadn't considered.

On the show, Urula King, Chardin's biographer, points out that he believed that a factor in the evolution of consciousness was the intensification of communication.  The more people with whom we can speak--the more people with whom we can share knowledge, share experience--the broader our understanding of the world becomes.  For this reason, King says, people call Chardin "the patron saint of the World Wide Web".  The web has put us into conversation with more people than ever before, so our collective consciousness is growing exponentially.  As the growth of Wikipedia demonstrates, the internet has enabled us to collaborate, to create cooperatively, in ways which we never thought possible.

All of this leads me to wonder about the depiction of love in "Her".  By the end of the movie, what distinguishes humans and computers is the human inability to love multiple people at the same time.  But is this really true?  Instead of being at odds with technology on this point, humans are using computers to form highly participatory processes that enable us to expand our understanding of the common good.  Collaborative editing isn't the same as dating--I do realize that.  But both activities can lead us to value the needs and insights and values of another person as much as my own.  According to Chardin, the power that enables this expansion of consciousness is Love.

In other words, computers aren't going to be frustrated by the limits of our ability to love.  They will help us grow our capacity to love.

Have you seen the movie?  What did you think??

Okay so I have not seen the film Her. I have been commenting on your blog as Facebook comments to the link to the blog, and as this appears to be working I guess problem solved. Having not seen the film difficult to say much. I like Facebook because I can keep in touch with people all over the world. A lot of thoughts surface in reflecting on the internet, virtual reality and cyberspace, but for now, commenting in the bog works. One step at a time.