"It Doesn't Help to Call Them Bigots" 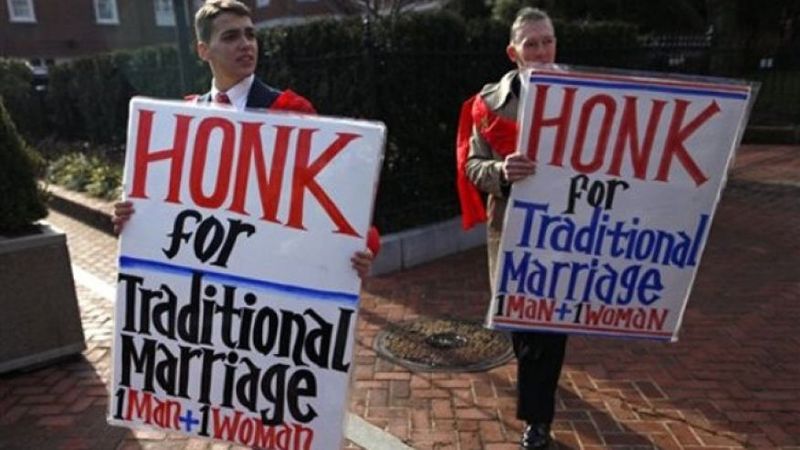 Last year, the public radio show "On Being" aired a series of moderated conversations they called "The Civil Conversations Project".  The goal was to "model new kinds of conversation and relationship with difference" and to "offer ideas and tools for healing our fractured civic spaces."  The show brought together people who are actively engaged in an effort to change the way they talk with those who disagreed with them.  I found the conversations fascinating and refreshing and hope they continue.

The most successful conversation, by far, was on "The Future of Marriage" and featured David Blankenhorn (the founder and president of the Institute for American Values) and Jonathan Rauch (a scholar and author of Gay Marriage: Why It Is Good for Gays, Good for Straights, and Good for America.)  I hope they re-broadcast this show in light of this past week's national conversation over the law passed by the Arizona state legislature and vetoed by Governor Jan Brewer that would have offered legal protection to businesses who refuse to serve gay and Lesbian people on religious grounds.  Jonathan Rauch said some things at the end of the conversation that advocates of marriage equality (myself included) need to take to heart.

As I wrote in my previous post, this law is evidence that religious conservatives who oppose homosexuality are becoming desperate and fearful because they know they are no longer in the majority.  When people feel like embattled minorities, their rhetoric and their actions become more extreme.  The more extreme their position, the easier it is for the rest of us to attack their views in the mainstream press, talk shows and in conversations everywhere.

There was something strange about the conversation this past week about the Arizona law.  Advocates of marriage equality sounded like they still believed they are an embattled minority.  They seemed incredulous that religious conservatives felt threatened by their recent legal victories.  They said their concerns were ridiculous.

While it is certainly the case that ten years ago the majority of Americans opposed gay marriage, this is no longer true.  This means that it is not ridiculous to be concerned for the rights of those who oppose gay marriage.  Gays and Lesbians and their allies know well "the tyranny of the majority".   The public conversation between proponents and opponents of gay marriage needs to shift in response to this shift in public opinion.  Jonathan Rauch said it so well that I will quote him at length:

Something very, very important happened around 2009. The Gallup poll for the first time showed a tie in people saying homosexual relationships were morally acceptable with people saying they were not morally acceptable. And the lines have now crossed. There is now I think it's like a 9- or 10-point gap of a solid majority of Americans saying it's OK to be gay. So this is new. This means we're now the moral majority.

This means the burden of proof is now on the other side. And this means it's going to be tempting for gay people to press our advantage and try to use the law to make it difficult for people who want to preserve religious traditions that are anti-gay to do so. And we have good reason for that. We have suffered very directly and very concretely and quite often with our lives from religious bigotry. It's not to say all religion is bigotry. So it is very tempting for us to say let's drive this out of society altogether. All forms of discrimination, whether religious or not, should be illegal and I'm saying to gay people, no, we've got to share the country.

There is a thing called the First Amendment. Religious liberty. We'll get squashed like bugs on the windshield if we try to go against religious liberty, but more important, we want to be in a live-and-let-live society where no one gets treated as a prisoner of conscience and feels the need to stay in the closet, frightened because of what they believe.

That's what we fought against all those years, long before marriage, and that's what we will continue to fight against. And that's why we need to be champions of all reasonable protections for religious people who may not agree with us and may not want to associate with us, but we need to let them share this country with us.

...Most Americans, even most anti-gay Americans, are not fundamentally bigoted or hostile. They're not evil; they're blind, and our job is to help them see.  It doesn't help to call them bigots even when they are, but usually they're not, usually they're not. Usually, they need to understand us better and go through something like a process kind of like what David's been through. It doesn't mean they'll come out where we come out, but you would be amazed at how open Americans can be over time and how responsive the conscience of this country is.

We need to share this country with people who disagree with us.  We need to make it clear to our opponents, even in the midst of our most heated arguments, that that they have a right to their own opinions and to speak their mind in public.  Giving businesses the right to discriminate is not the way to do this, but this issue is not resolved by Jan Brewer's veto.  Public opinion has shifted, and now a new conversation needs to begin.

If we could all behave this emotionally intelligent our society would be much better off.

As always, Heather you have stirred up some wonderful thoughts and I am thankful for your exploration of the changing issues in our world. No matter where we find ourselves, we need always to be willing to hear one another... Thanks!

This is a wonderful post but I am leery about using language about freedom as the morally grounding language underlying these claims. Not that you are trying to do that but I think it is a rather short leap from your post to the claim that freedom is the main issue. Over the course of my life I've come to believe that human flourishing/well-being/ thriving is the issue, and that our values should center on how to support everyone's thriving - both the thriving of LGBTQ people and allies, on the one hand, and the thriving of people who, for whatever reason, find homosexuality morally repugnant. That, I believe, is our real challenge - not navigating the shoals of liberty.