On Being Nothing In Particular
Talking About Love, Learning About Power 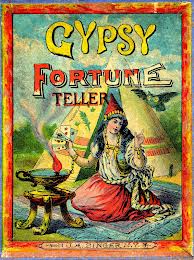 A few years back, my parents gave my daughter a souvenir from their trip to Turkey—a silk scarf with little metal coins sewn around the edge.  Rosa loved it, and immediately decided that she would use it as part of a gypsy costume the following Halloween.  We had great fun planning her costume.  Our mental picture of a gypsy included a long skirt, a peasant blouse, a scarf wrapped around the waist and another wrapped around the head.  But just to be sure we were on the right track, we googled “gypsy” for images.  That’s when things got tricky.

My mental picture didn’t quite match the real life pictures of the real life gypsies, the Romani.  I started out searching for pictures of dresses and scarves and ended up reading articles about the wretched living conditions in Romani camps outside of Paris and other European cities and articles about the problems of children who are required by their families to pickpocket.  I went on to read about various attempts to assist, organize or expel these people from France and elsewhere in Europe.  I did my best to summarize what I’d learned to Rosa.

Rosa is a pretty savvy kid, and she understood that her costume was based on a stereotype that is problematic for the real life people on whom it was based.  The “image” on gypsies is romantic and exotic and a tiny bit scary.  We tell stories of the perceptive fortune-teller or the traveling band of colorful musicians, and imagine people who live with a kind of freedom and passion that we secretly envy.

But the real life gypsies seem to have none of the appeal of the ones in our imagination.  This isn’t just because they don’t meet the expectations created by our stories.  There is a much more complex and fascinating dynamic at work here.  We’re attracted and repelled by cultural distinctiveness.  We want people to be exotic, but are deeply bothered when those same people resist assimilation or refuse to play by the rules of the dominant culture.

An excellent article in this week’s New Yorker magazine by Adam Gopnik painted a fascinating picture of these dynamics as they are playing out in France right now.  France has a strong commitment of a unified culture and unified identity--one that is accessible to everyone through education but still quite distinctive.  While there is a lot of support for multiculturalism in the United States, at least by the schools and the government, the official position in France is that everyone will identify with the universal ideals of the Republic.  All particularities will be subsumed within that larger identity.

The Roma have historically resisted integration--or France has resisted the full integration of the Roma.  There has instead been a series of accommodations that acknowledge and solidify their status as Other including special identity cards.  But as I am learning, the relationships between "us" and "them", between the universal and the particular, between those who blend in and those who stand out, are complex.  We need people who are "not us" to know for sure who "we" are, so our identity depends in part of their refusal to identify with us.

"This is not about the fear of the other," he said.  "It is about the fear of oneself.  Mobility, rootlessness, nomadism--these are the facts of the new Europe.  We must read Victor Hugo.  The happy face of nomadism is all the French gone to London to be bankers.  The wretched face is the poor Roma in their camps.  And, great surprise, the miserables of our time turn out to be poor immigrants in the cold who behave like poor immigrants in the cold.  Behind it, beneath it, is the new fear of having no floor beneath one's feet.  Ordinary French people feel that a real fall is possible."

"This obsession with the Roma is not about fear of the other," Gluksmann said.  "It is the fear of the self--of what we might become."

By the time Rosa and I really started to understand all of this, it was too late to ditch her planned Halloween costume.  We decided in the end to add an ammo belt to her ensemble.  She was no longer a gypsy—she was a Roma freedom fighter.  I’m not sure anyone beside us understood the reference.