What I Didn't Even Know I Needed 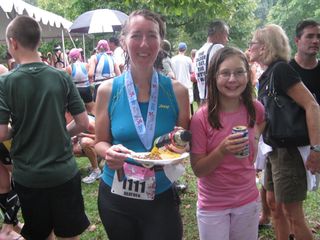 A couple of weeks ago, I participated in the Iron Girl Triathalon here in Columbia.  Along with 2,500 other women aged 13 to 69, I swam .62 miles in Lake Centennial, biked 17.5 miles and then ran 3.4 miles around the lake.  So many people have asked me about the experience that I thought I'd post a few thoughts here.

I knew about the Iron Girl because its hard to live in Columbia and not notice the barricades with pink signs that pop up around Centennial this time of year.  I participated because it seemed like a doable challenge--something that would motivate me to exercise without killing me.  As the event approached I added occasional swimming and biking to my usual plodding morning runs, but I can't say I trained with a great deal of planning or urgency.  Since I had mostly signed up in order to motivate my training, I figured the race was something I just had to get through.

Things didn't get off to the best start on the morning of the race--I had to get up at 4:30 in the morning to get to the course by the suggested time and then I ended up having to use a port-a-potty barefoot.  But the lake wasn't nearly as gross as I had expected and about 10 minutes into the swim it suddenly occurred to me that I was having a really good time.  Things only got better once I got on my bike.  All around me women were talking to each other:  "Okay, here goes the first hill!  Let's do it!"  "Watch out for the car!"  "Doing great!  Keep going!"  Our race numbers had our first names printed on them, so as I was pushing up the steepest hill the woman who passed me shouted, "Good going, Heather!"  Pretty soon I was doing the same thing.  As I whizzed down a long, winding hill I shouted to the woman next to me, "Isn't this fun!" and she replied, "Wheeeeee!"

The running was a little tougher, but there was even more encouragement, including a man who was shouting at the top of one of the hills, "That's it!  You are more than half way done!  Way to go!"  When I was about a quarter of a mile away from the finish line, there were spectators all along the course, cheering and screaming.  When I crossed the finish line and the announcer proclaimed, "You are an Iron Girl!" I started to cry.  Someone gave me a medal and someone took my photo.  My husband and kids came running over and hugged me and I cried some more.

The Iron Girl was without question the single most affirming experience I've had in years.  I had no idea it would be like that.  Before the race, I thought that all of the rah-rah talk about the power and grace of women was kind of corny.  But as it turned out, I soaked up all that affirmation like a dry sponge in a puddle.  I felt great for days afterward and have firm plans to do the event again next year.

Affirmations are a big part of every youth group I've led and every summer camp I attended.  My sons came home from their summer camp this year with sheets of paper on which every kid and counselor had written affirmations ("You're smart and cool and a good hiker!") and those sheets are still on their dressers.  But it seems that once we grow up, we're expected to need a lot less praise from other people.  Mature people are motivated by the intrinsic good of their work, not by the approval of others, right?  As the oft-quoted "Paradoxical Commandments" make clear, sticking on the right path pretty much requires us to ignore the comments others will make about what we are doing.

And yet, it sure does feel great to have someone say you did a good job.  Having had a big long dose of affirmation at the Iron Girl, I'm ready for a more steady supply.  So I am trying to "be the change I wish to see in the world" (to quote Ghandi) and pass some of that affirmation back out to the world.  As a result, I've been paying more attention to what people are doing well--at church and at home.

Yesterday, at our Church Council meeting, Charlie pointed out that September 1st was my fifth anniversary as Enabling Minister at KC.  He added, "I believe that God was guiding the search team when we called Heather."  He words were affirming--but not just of me.  Like the baseball players who point to the sky when they hit a home run, Charlie gave credit to God for all that is good.  Amen.

I'll say it, too. Good job. And congrats on your anniversary.

Wish I could've been there to see you finish. Of course, if you were doing your job instead of goofing off with all this macho chick stuff then maybe I wouldn't have gotten stuck helping with the worship service. Perhaps next year we can move the service to the finish line.