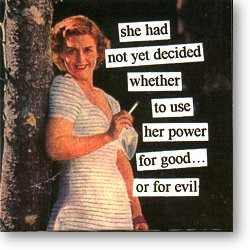 There is a popular line of stationery available that combines vintage 40s & 50s era photos or drawings of women with witty modern-woman thoughts. The juxtaposition of wholesome vintage images and modern irreverence are humorous. A current favorite depicts a beautiful woman in a flowing dress leaning casually against a tree, cigarette dangling in one hand, mischievous half-smile causing you to wonder about her motives. The caption reads, "She had not yet decided whether to use her power for good or for evil."

Matt had the opportunity this week to hear renowned neurosurgeon Ben Carson speak at a conference addressing issues of spirituality and medicine. Ben described his career choice as a discerning process -- he was good with his hands, could picture things in three dimensions and was interested in the workings of the human brain. BINGO! Neurosurgeon. And we all know successful people who turn their success into THEIR success. But Dr. Carson approaches his work with deep awe for a God that he cannot possibly understand and a keen recognition of his own limits of rational thinking. He recognizes that he has gifts and he puts those to work each day for the good of the world, giving honor to the God who created him with those gifts.

Most of us don't have a story that is quite that clearly interpreted. Our gifts are perhaps less Concrete. At our house, we would point to our "Liberal Arts" degrees - not exactly boldly defined skill sets! Is putting a skill to work for material return evil? Good and Evil is a spectrum, right, with lots of room between the two? Just how far to the Good do we need to be? And what responsibility do we have to fulfill the Good we know we are capable of? If there is an option for doing Good in front of us and we do not take it, what does that mean?

The lectionary readings this week swim around in these murky waters a bit, and cause us to consider the real outcomes of our choices.

In the story from Acts, we begin with a girl who has some pretty exceptional powers - she is a slave possessed by a spirit of divination. She uses this "asset" to make nice sums of money for her master. Paul uses his "power" to cast out this spirit. And the master uses his power as a Roman citizen to accuse Paul and Silas, as Jews advocating unlawful behavior. The magistrates have the men beaten and jailed, but that night, an earthquake literally opens the prison. The jailer, afraid that he has lost all of his prisoners, is about to commit suicide, but Paul calls out to him - we're all here. It's OK. We haven't escaped. And the jailer is so overwhelmed by this turn of events that his eyes are open to God's power...power for good that is saving these prisoners, but they are not running away. He turns and asks what he needs to do to be saved. They share the good news of Jesus Christ and he takes them home, tends their wounds and they baptize his entire household. Now, a lot of things could have happened differently in this story, and it hinges on individual choice of how to use their Powers, Gifts, Abilities.

The psalmist sings praises of the Lord who knows well the Lord's power and uses it in wise ways, recognizing the difference between Good and Evil. Ah to be that sure, eh?

In John's Revelation we see several examples of folks using their powers for Good. We see Jesus telling us what he is going to do with his power and responsibility and we see him offering the invitation to anyone who hears him to 'come' and take the water of life as a gift. However, this is a great example of the two sides of power and responsibility--one side can use her power to extend an offer, but the other side must also use his power to accept it.
Jesus is praying to God in the selection from John's Gospel, and his petition is on behalf of his followers, but also on behalf of those who will come to believe BECAUSE of these early followers. As he's facing his own degradation and destruction, he's praying for the continuation of what he began. He's praying for their future gifts, for their understanding of all that has and will happen, and for their strength to continue the work that has been begun. He's using his power to invest, in some way, in the future - to ask God to be present in them.

It would seem that a key to being able to make good choices about how we use our Powers - for Good or Evil - has a lot to do with our connection to God and to others in the world. When we are drawing deeply from a well, engaged in conversation with God and with our community about how the world works and what the world needs, when we are caring for our gifts and tending to our own spiritual health, we are able to choose Better More Often.

© matt & laura norvell 2010 www.settingourstones.org
we want to share this with you and hope you'll share with the world;
we simply ask that you let people know where you found these words.
May Grace & Peace be with you.