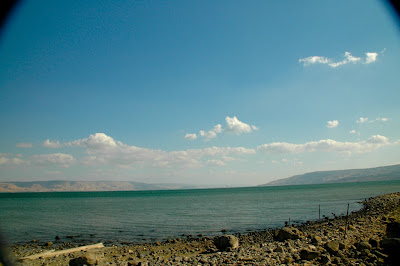 The Voice of God?    The Songs of Angels?     Jesus Cooking Breakfast?

These are all images from the lectionary readings this week. And they are all pretty foreign...to us at least.

To have interaction this directly with God seems overwhelming from here. Even to have such interaction in a Dream or a Vision seems like something that only happens in stories about people that lived a long time ago in foreign lands.

There is plenty in the bible that we can relate to easily. People who make mistakes, people who are trying to figure life out, people praising God in the heavens, farmers, gardeners, money-changers, etc....there are plenty of things that are 'earthy' that we can handle and understand and grasp. But the Voice of God? That seems so far away.

And in the old Testament, people believed they would perish if they saw God's face. It would seem to us that glimpsing God and interacting so closely with God might be similarly risky. RIght? Annie Dillard asserts, "It is madness to wear ladies’ straw hats and velvet hats to church; we should all be wearing crash helmets. Ushers should issue life preservers and signal flares; they should lash us to our pews. For the sleeping god may wake someday and take offense, or the waking god may draw us to where we can never return.”

Encounters with God change us somehow. Abram became Abraham. Sarai became Sarah. Moses became a leader. Saul became Paul. Peter became the rock on which the church was built. And it is among these interactions the lectionary wanders this week.

The passage from Acts recounts the story of Saul's conversion. As he is headed into Damascus to persecute those who followed Jesus, he hears Jesus speak to him. He's left blind and has to be led into the city by his fellow travelers. Somehow Jesus sends Ananias to heal Saul - to restore his sight. Filled with the Holy Spirit, Saul leaves the place changed...so changed that his very identity morphs - he is baptized and becomes Paul, who will go on to build communities of Christians throughout the Mediterranean.

The psalmist sings praise and thanksgiving for the Lord who has delivered her from Sheol. God has turned her mourning into dancing and her sackcloth into joy. Transformation with a capital T.

All of Revelation recounts a prophetic vision. This week's passage recounts the singing angels and a chorus of creatures on earth and in heaven. They are praising a new heaven and a new earth - a New Jerusalem....a Jerusalem without walls. The whole of creation is transformed by an encounter with God.

And finally, in the Gospel of John, the resurrected Jesus appears to his followers who are struggling to catch fish. There is so much going on here. Remember that Jesus called James and John from their nets to follow him. Now after the resurrection, Jesus appears to Simon Peter, Thomas and two other unnamed disciples who have gone out to fish. They are having no luck. We can sort imagine that fishing might have been an effort at normalcy given all they had just experienced. But then on shore appears a familiar sight and Jesus calls to them, instructing them to cast their nets on the other side. They bring up so many fish they can barely return to shore. Once there, Jesus has prepared a fire and beckons that they join him as he prepares their abundant catch. The disciples have now encountered the risen Christ three times. And this time, Jesus shares an intimate dialogue with Simon Peter, the same man who had denied him three times after leaving the last supper. Peter, do you love me? Lord, you know that I do. Feed my sheep. There is something transformational about that charge. It is almost a sending forth - an acknowledgment and in fact a challenge that it is ok to move forward and continue the work that Jesus began.

It's hard for us to relate to these transformational, life-altering, unbelievable experiences.

God, I often pray to be Transformed,
but I am not sure I am 100% for the idea.
I mean, will it hurt?
Will I still get to laugh at things on television?
Will I still get to sleep in a bed
in a home with conditioned air?
I pray that You will fill me,
but I have to admit I am really scared of the idea.
I don't know that I really am ready
to have less of me and more of You.
Certainly, in theory, I like the idea;
but I am just getting used to
the way things are now.
I want to follow You.
I want to serve You.
I want to do your work in this world.
And I am scared of changing my name.
Amen.

© matt & laura norvell 2010 www.settingourstones.org
we want to share this with you and hope you'll share with the world;
we simply ask that you let people know where you found these words.
May Grace & Peace be with you.

Posted at 08:32 AM in Lectionary Reflections | Permalink | Comments (0)