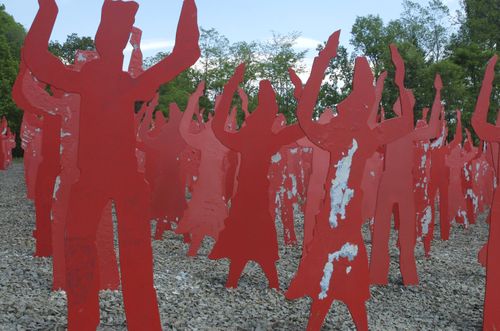 Are we ever really alone?  Were we built to be alone?  Even in our loneliest moments, is there some present with us?

In Genesis 1: 26 - 27, even God seems to be creating with company, "Let us make humankind* in our image, according to our likeness..."  Our likeness?  Who is he creating with?  He goes on to create man and woman "in his image."  Huh.  It is important to note that these texts have been studied and translated and unpacked so many times, this isn't just an error in pronoun.  God is referring to other presences with him at creation.

Even God is not alone.

It seems like a lot of our conversation around our connections to God involve being in relationship.

It is Pentecost, a day some refer to as the birthday of the Christian Church.  It is the day on which Christian churches recognize and celebrate receiving the Holy Spirit.  Pentecost is a Jewish festival, held fifty days after the Passover as a  celebration of Moses receiving the Law from God on Mount Sinai.  As the story is told in Acts, a group of faithful Jews from all over the world had gathered in Jerusalem for morning prayer on Pentecost when they were overcome by the presence of the spirit, and each of them was able to speak in tongues that each could understand in spite of their geographic and politic diversity.  This community of Christian Jews recognized this experience of the spirit as a sign, and over time, Christians began to celebrate Pentecost as another chapter in the history of God and the people, a time when the spirit descended.

The early church at the time of this visitation of the spirit was in difficult straights.  The end times that they believed messiah would initiate had not come.  Christians were being sought out and persecuted.  There was tension between Christian Jews and non-Christian Jews, and everyone was still trying to sort out how a daily growing crop of Gentiles who followed a martyred Jew fit into the mix.

We wonder - is it possible that through the spirit, we are never intended to face life alone.

First off we read one of the more dramatic scenes in our Holy Scriptures--Ezekiel's vision of the valley of dry bones being regenereated in to life.  We get to read a wonderful conversation between Ezekiel and God where God gives Ezekiel the chance to do some impressive work.  He gets to call the dry bones of Israel back together and once they are back together he calls on The Breath / The Spirit to come and fill the bones and give them life.  Notice, in this description of Israel being revived, none of this is done alone and it is the Spirit / Breath that is necessary to make it all happen.

The Psalmist also sings a similar sentiment as he speaks about the wonders and works and powers of God, he points specifically (in verse 30) toward God sending The Spirit that Creates and Renews.  Again, God is in relationship with humans and the world to make it all work together.

In the passage from John we find Jesus explaining to his followers that after he left he would be sending an Advocate.  He explains a lot of the mechanics of what the Advocate would do for the followers.  It / He would testify on behalf of God the Father, it / He would prove the world wrong where it was wrong, it / He would guide the people in truth and would speak to the people on behalf of the Father and the Son.  It sounds like quite an intimate relationship between the Father, the Son, and the Advocate.

And then in Acts we see in the classic Christian Pentecost text--the story of the flames of fire coming down and the people speaking in other languages, etc.  From the very beginning of this story it is important to note that none of these folks are alone.  The Spirit shows up to them when they are together.

-Are there times when you believe you are alone?  When that time is past, do you think differently about your "aloneness?"
-Do you believe that you have ever been truly alone?
-How are you aware of the "Breath" of God in your life?

WE DIDNT START THE FIRE BY BILLY JOEL

Rosenbergs, H-bomb, Sugar Ray, Panmunjom
Brando, "The King and I" and "The Catcher in the Rye"

U-2, Syngman Rhee, payola and Kennedy
Chubby Checker, "Psycho", Belgians in the Congo

Pope Paul, Malcolm X, British politician sex
JFK, blown away, what else do I have to say

Why do Christians love torture?

Rosa and I were in the car yesterday when the top-of-the-hour news came on with clips from President Obama and Vice President Cheney's speeches about torture.  Rosa started paying attention when Cheney's said:

"I was and remain a strong proponent of our enhanced interrogation program. The interrogations were used on hardened terrorists after other efforts failed. They were legal, essential, justified, successful, and the right thing to do. The intelligence officers who questioned the terrorists can be proud of their work..."

At which point Rosa broke in and said with total incredulity, "Who said THAT??"  At ten, Rosa still has a sense of how ridiculous it is to say that anyone would be proud of torturing anyone else.  I know that some would argue that torture could be justified, but to say that it's praiseworthy?  How have we come to that?

Rosa's comment stayed on my mind because, like her, there is part of our nation's conversation about torture (or "enhanced interrogation techniques" as Cheney likes to call them) which I just don't get.  It's not just that I disagree--I simply can't figure out how anyone could agree with the use of torture.  I can't empathize with the proponents of torture which makes me pretty useless in public conversation on the topic.  My opposition to torture is based on two things that are utterly essential to my morality:  the importance of the rule of law and the sacredness of human life.  (Plus, everything I've read leads me to be opposed on pragmatic grounds as well.  I just am not convinced that torture leads to any useful information.)

But a couple of weeks ago, a study by the Pew Forum on Religion and Public Life came out that really disturbed me.  You can go to the link to see the actual survey results, but in summary, the more often a person goes to church, the more likely they are to support the use of torture (and they used that word--not "enhanced interrogation techniques").  The Americans most likely to support torture are white evangelicals (62%) and those unaffiliated with a religious group are the least likely to support torture.

As I was ranting to Dan about this, he pointed out that the study showed that party affiliation is a MUCH stronger determinant of support of torture than religious affiliation is.  Basically, Republicans are likely to support torture, and the survey just showed where the Republicans are.  And while his point is correct, I don't think it's the whole story.

Here's the thing:  Jesus was tortured.  This is one of the reasons while it blows my mind that any Christian could support torture since we all know that at least one innocent person has been tortured under false accusations by the state.  But what if our religious teachings tell us that while it was unfortunate that Jesus was tortured, it did, in fact, serve a good purpose.  It had a good outcome because (in the words of Isaiah 53:5):

...he was pierced for our transgressions,
he was crushed for our iniquities;
the punishment that brought us peace was upon him,
and by his wounds we are healed.

Could it be that by talking so much about what we've gained by way of Jesus' torture we've actually taught ourselves that torture can actually be a good thing?  A useful and important thing?

This is serious, people.  Obama and his people have their work to do rooting torture out from the practice of our government.  But I think Christian churches and Christian leaders have our work to do too.  We need a better theology of suffering, a better understanding of Jesus' suffering, if we're ever going to clearly oppose it's use by our government.

Love is (at least) a two player activity.

Of course, it does not necessarily require two humans, but the action of Love does require a Lover and a ....Lovee.  One does not just Love alone in a vacuum.  There is always a person, place, or thing that is Loved.

In the lectionary selections this week we have one narrative example of Love in action and a couple of expositions on how and why we should Love.

In Psalm 22 we see this played out quite well.  The Psalms are often songs of Love and devotion to God, and it is no different here.  The psalmist speaks about how the world is a better and safer and more hopeful place because he Loves the Lord (as evidenced by his respect and praise).

In Acts, we see the narrative example.  Now there are lots of things going on in this passage.  An angel talks to Philip several times...an Ethiopian had come from Egypt to worship in Jerusalem....Philip engages in international relations and engages the Ethopian....they read some of the Hebrew prophet Isaiah together...Philip tells his new friend about Jesus...the Ethiopian ends up almost demanding to be baptized....and Philip ends up being teleported elsewhere immediatly after the baptism takes place.  Now all of this is fascinating and really interesting, but the engine that pushes the whole story forward is the fact that Philip was in relationship...he Loved this Ethiopian man by engaging with him.  If he had not been willing to talk with him and share some of his story with this man, the Ethopian would not have understood Isaiah and would not have been baptized.  Love is a two player activity.

In 1 John we see a fairly detailed, quite rational argument for why followers of Jesus should Love one another.  It is almost as if we need to put Heather at the flip chart with a marker to diagram this whole thing out--love each other because God loved us...if you love you are from God...if you are not you do not...because God loved us we should love one another....etc.  Even though it is a little complicated and a bit circular in its logic, this passage points to a recurring theme--an individual cannot Love alone.  Love is a two player activity.

And then in the gospel of John Jesus really brings the message home with the description of how the Loving relationship works and what it looks like through the metaphor of a vine and it's branches.  Jesus (in this instance also through the pen of John) make a quite rational argument.  Since John was the latest gospel it seems we are seeing a little bit of the influence of Greek philosophy / thought even in this illustration.  Thinking of Love in this way again shows that there is no way to Love on one's own...one is always connected to someone or something else in the process of Loving.  And without someone or something else, one cannot Love.

We come to understand Love by being in relationship with others.

Who / what has most taught you how to Love?
What relationship(s) are the ones that keep you most alive / sustained?
How can you reach out in Love to help someone else learn more about Love?


"All You Need Is Love"
Beatles