Well, as far as I can tell, everyone in our group worked hard today. We were in three groups, working at two different houses. The group I was with was composed of people who complained that they hadn't done that much work yesterday. Well, the MDS organizer took our interest in hard work seriously, and assigned us the job of hauling trash out of the swamp that surrounds one of the houses they are renovating.

The house is owned by Mitch who built the house himself and has lived out there for 37 years. The house, like all the houses in the community, is accessible only by boat 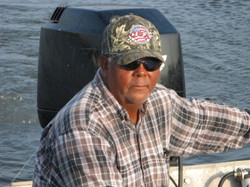 . There were at least 30 houses out there, from the looks of it, but since Katrina there are only one or two that have been reinhabited. Mitch said it was a great place to live and raise kids--and Katrina was the first time they ever had water in their house.

Our job today was to haul all the trash and debris out of the front and back yards of Mitch's house. Some of the trash was from recent construction, but the layer under that was stuff that had been there since the hurricane. It was a dirty job--but fun in a sick king of way.

There was also a group inside the house doing some carpentry that required more skill--and more patience--than most of us were able to muster.

The third group was "mudding" (covering over cracks in the dry wall with spackle), taping, san 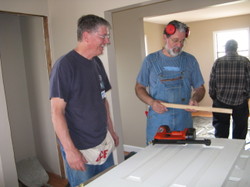 ding and even a bit of electrical work. This work was a great opportunity for Sophie, with her meticulous attention to detail and great patience, to shine. Mary Jane, on the other hand, said at dinner tonight "I should be shot before being allowed to spackle again."

We're all tired tonight--all except for Ethan, Vernon, Matt, Natalie and Sophie who have been playing ping pong for the past two hours!

Thanks for the updates, our prayers continue with you all. Charlie

Wow! Sounds like an intense day. Can you post a picture of one of the houses, and the woods?